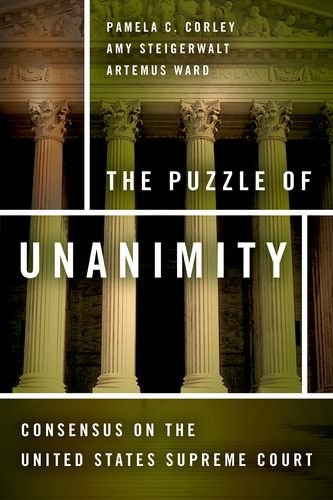 Pamela C. Corley, Amy Steigerwalt, and Artemus Ward open with a simple question: “How do we explain decisions where conservative justices agree with liberal justices on potentially contentious issues?” (p. 1). They argue that fully understanding unanimity on the Supreme Court requires understanding how legal factors shape the Court’s decision making.

The authors begin by illuminating the institutional changes from 1937 to 1947 that catalyzed the Court’s shift from a collective, consensual body to a more‐individualistic and dissensual body. Next, Corley et al. address how, despite the rise of dissensus, a significant proportion of cases continues to be resolved unanimously. They argue that many considerations, including legal, attitudinal, strategic, institutional, and case factor, contribute to consensus on the Court. One major contribution of the book is the manner in which the authors incorporate the influence of the law, positing both a direct and an indirect influence on the Court’s likelihood of reaching consensus. They pro­pose that consensus is more likely when legal certainty, defined as an index of five components (cases involving a lack of legal complexity, amicus participa­tion, legal conflict, legal dissensus in the lower court, as well as statutory cases