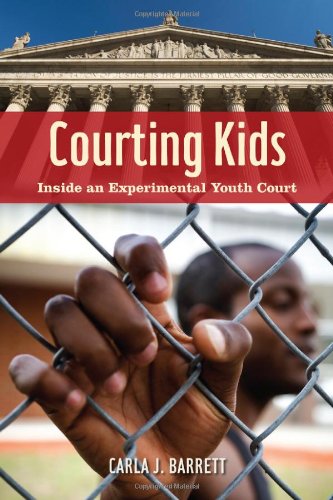 The past three decades have seen the development and passage of public policies that have changed some of the core principles and philosophy of America’s juvenile justice system. Across the county, state legislatures have engaged in an undermining of the concepts of parens patria, best interest of the child, and rehabilitation in favor of an accountability‐based system of juvenile justice that focuses on the goals of deterrence and proportional punishment.

Courting Kids: Inside an Experimental Youth Court is an ethnographic study of an alternative approach to dealing with youthful offenders between the ages of 16 and 18 in the state of New York. States vary relative to the minimum age for adulthood, with the majority establishing 18 as the threshold. New York is one of 11 states that define 16 as the upper age limit for processing youthful offenders in the juvenile justice system. These adult‐juveniles, as labeled by Carla Barrett, are caught in a legal conundrum: adults for purposes of criminal prosecutions but juveniles in all other legal and social venues (p. 12).

New York was the first state in the United States to pass accountability based public policies for juvenile offenders. In 1978, New York passed the Youthful Offender Act, which specified that juv