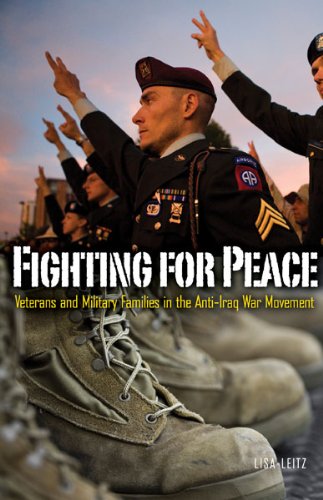 This book is a study of the peace movement among veterans and military families. Fighting for Peace is based on Lisa Lietz’s experiences as the spouse of a deployed soldier, multiple years of fieldwork, and extensive interviews with many peace activists. The movement raises important issues for political psychologists because participants must resolve, or integrate, two identities with seemingly contradictory demands. Peace activists are against war, while soldiers fight those wars.

The book accomplishes a number of goals that will be valuable to scholars who study protest movements and the relationship between society and the military. First, Fighting for Peace maps out the “who” of the veterans’ peace movement. Roughly speaking, there are current or recent soldiers; veterans of previous wars; and family members of current, former, or deceased mem­bers of the armed services. Second, the book describes the social psychology of veterans and military families who join the peace movement. There are multiple paths into the movement, and different organizations exist to promote varied goals. Some, such as Military Families Speak Out, not only protest war but also provide support to military families who have been isolated by their activism or the activism of their spouses or parents. Other organizations support conscientious objectors, and some focus on public outreach.

Third, the book effectively describes what sociologists might call “identity work.” Given the apparent conflict between their identity as a peace activist and as a veteran or military family member, individuals must fashion an explanation, or account, of how these two identities can coexist. They must explain to their audience, and to themselves, why soldiers can also be for peace. In some cases, it is fairly straightforward. The veteran might object to this specific war, not wars in general. While logically parsimonious, this sort of framing has problems. Specifically, the U.S. armed forces do not grant objector status to people who disagree with a specific conflict. Other types of identity work entail a substantial reworking of one’s identity. A soldier may decide, in some cases, that all war is immoral and that he or she needs to reconstitute his or her relationship to the military.

As a study of social psychology, Fighting for Peace is a strong contribution to the ever-growing literature on activist identity and biography. It is a fitting addition to the scholarly work stemming from James M. Jasper’s The Art of Moral Protest, which explains how life events can lead people into activism. But there is a broader, more subtle lesson that can be drawn from this study. Many of the veterans and military family members joined protest movements because they felt that the deployment of the U.S. armed forces violated an important but unwritten contract between the civilian world and the military. Specifically, many veterans and family members resented the extremely long terms of deployment. Typically, American soldiers might expect one or two tours of duty in a theater of war. However, this policy changed during the Iraq war, as soldiers were routinely required to serve three or four tours of duty or were called back to duty after leaving the armed services. Thus, the movement among veterans and military families was not merely a protest against war, or even a specific war. It was also a protest against a broken promise between those who had volunteered to defend their country and those who had the power to send them into harm’s way.