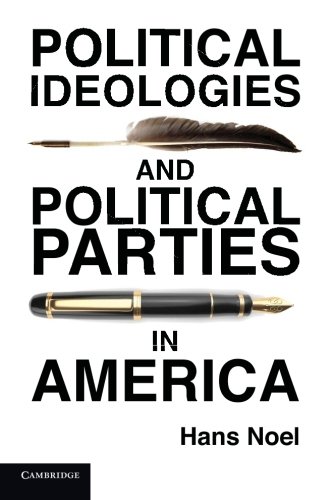 “Ideology” and “party” are two of the most frequently used terms in discussions of American politics. However, the current political environment, in which liberals are Democrats and conservatives are Republicans, has made it easy to conflate these two terms. The measurement of ideology adds to the confusion, as standard measures such as NOMINATE capture ideology, party, constitu­ency interests, and any other factors that result in members voting with other groups of members. Hans Noel seeks to understand how ideological and partisan coalitions are distinct and how the liberal-conservative ideologies we recognize today came to align with the party coalitions. He emphasizes that parties need not be organized around ideologies, much less around the liberal-­conservative dimension. Parties care about winning office and can join togeth­er issues to create a winning coalition regardless of whether that coalition contains strange bedfellows. Ideologies, by contrast, are focused on principles and may reject possible allies who do not share key principles. Over the course of American history, political thinkers constructed the liberal-conservative ideological dimension, and parties collapsed around that ideological dimension.