The Gingrich Senators: The Roots of Partisan Warfare in Congress, Sean M. Theriault 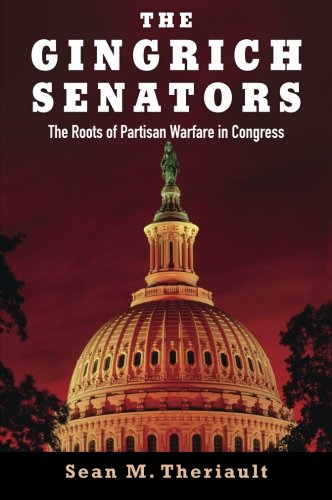 Sean M. Theriault does a great job of combining rigorous quantitative methods and data with rich anecdotal coverage of the U.S. Senate’s personalities and events since the 1970s. The Gingrich Senators has a clear and provocative argument: the huge changes in the Senate in terms of ideological extremism and superpartisanship are largely attributable to the group of Republican senators who served in the U.S. House after 1978 (the year Newt Gingrich was elected to the House). These senators are distinctly more conservative than the Republican senators who did not serve in the House, and thus they are a major factor in the polarization of the Senate in the last couple of decades. They are outdone in ideological extremity only by the recently elected Tea Party Republicans.

Beyond ideology, Theriault shows quite convincingly that his Gingrich senators, whom he calls “partisan warriors,” bring a new and intense flavor of partisanship to the Senate. As a group, they seem to be on a quest to make life miserable for Harry Reid and Barack Obama through procedural efforts to gum up the works in the Senate and all manner of delays of the president’s appointments, even for candidates widely viewed as qualified and otherwise acceptable. I have no problem at all with empirical analyses; Theriault seems to have it right in that the Gingrich senators are distinctive and relatively cohesive, although it is not clear whether they are a self-conscious group or just fellow travelers in pursuit of a common goal.

More could be done to address the question of why these senators are so different. Theriault deals with the question indirectly in some rough quantitative controls for state characteristics, but he does not confront the question head on.

Explaining the distinctiveness of the Gingrich senators poses an interesting challenge for contemporary legislative theory, which focuses on institutional incentives and rules to account for the behavior of individuals and then collectively for the houses of Congress. But the defining factor for the Gingrich senators is their service in the House during a particular period. Are they different because of their years in the House? Or is serving in the House as a Republican during these years correlated with some other unidentified explanatory factor?

Given the book’s title, one might suspect that socialization or closeness to Gingrich while in the House might have something to do with it. But Theriault convincingly slams the door on this idea with early quantitative analyses showing no relationship between proximity to Gingrich and the legislators’ behavior in the Senate. Then, in a really fun section, Theriault gathers juicy quotes of his group of senators’ reactions to Gingrich’s 2012 presidential effort. We find that, in no uncertain terms, they do not like him and, with precious few exceptions, did not want to serve under him as president. They are superideological and hyperpartisan, but not because they see themselves as carrying the torch of their former leader.

In the end, Theriault has done a terrific service in helping explain why the Senate has mirrored the House in polarization and partisanship. It is the Gingrich senators! But why this group is so distinctly different remains to be fully addressed.

This is a must-read for congressional scholars, and it demonstrates a fascinating pattern of behavior that has important consequences for the character of the modern Senate. The patterns that Theriault uncovers are intriguing and make me look forward to the theoretical framework that will tie all this together.