The Death of Deliberation: Partisanship and Polarization in the United States Senate, James I. Wallner 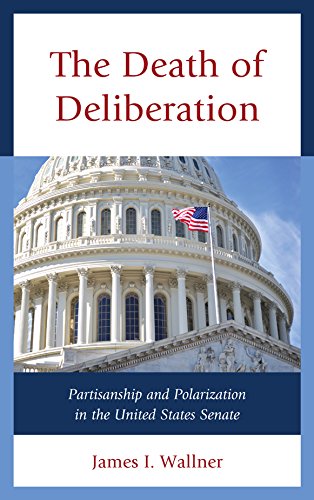 In this book, James I. Wallner provides a much-needed window into the modern Senate. The U.S. Senate is now the most important and powerful upper chamber in the world. The critical test for most legislation is whether it can attract the 60 votes necessary to pass the Senate. To do so, it must undergo an open deliberation process on the chamber floor, at least compared with the U.S. House. Because of its small size and informal rules, the Senate is ever involving as its personalities change and senators develop informal floor procedures to balance their formal commitment to open participation with their obligation to act.

Consequently, the Senate that can be written is not the eternal Senate. Donald Matthews’s classic U.S. Senators and Their World (1960) provides an extraordinary account of the 1950s Senate that was already disintegrating when the book went to press. More aggressive senators, accommodating party leaders, the acceptance of low-cost filibustering, and increasing partisanship soon transformed the Senate. This new Senate is an opaque case to study. The agenda-setting process largely consists of backroom negotiations. When these negotiations stalemate and we observe a filibuster on the Senate floor, it is difficult for outsiders to allocate blame. Is the minority party obstructing the public interest to deny the majority party any cred