The Republican Party in the Age of Roosevelt: Sources of Anti-Government Conservatism in the United States, Elliot A. Rosen 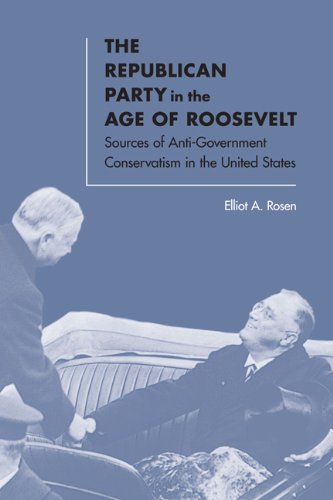 Few historical works seek to tackle what Elliot A. Rosen describes as “depres­sion causation,” or the complex set of variables that scholars believe were involved in the onset of the Great Depression in the 1930s. Fewer still seek to capture the full scope of the political and ideological tumult that the New Deal caused within the Republican Party or to tie the party’s antistatist reaction to Franklin D. Roosevelt’s presidency to the policies and thinking of the modern Republican Party. This is precisely what Rosen sets out to do in The Republican Party in the Age of Roosevelt, and he is, for the most part, successful in his efforts.

Rosen grounds his study in an analysis of Herbert Hoover’s personal and intellectual reaction to his 1932 presidential defeat to Roosevelt. Despite the scope and persistence of the economic downturn that followed the 1929 crash, Hoover viewed the interventionist, regulatory policies proposed by Roosevelt not only as counterproductive but as wholly inconsistent with the tradition of limited, decentralized government that had made America the great and powerful country it was. In Hoover’s opinion, “to embark . . . on the course proposed by [his] opponent would undermine and destroy the nation’s basic institutions and achievements,” Rosen writes (p. 12). Roosevelt and