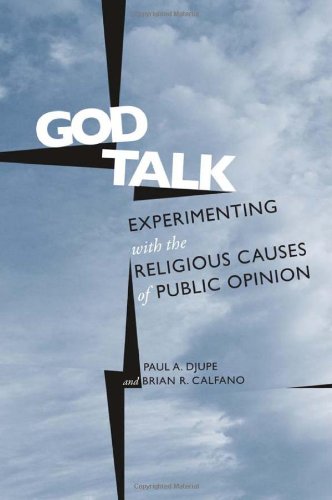 This is one book that does not suffer from a lack of ambition. Paul A. Djupe and Brian R. Calfano set out to change not only the way that scholars think about religion’s influence on public opinion but also the methods that scholars use to investigate those relationships.

Djupe and Calfano are critical of research based on what they term the “religious commitment” approach. Typically, this work begins by identifying an individual’s religious tradition—mainline Protestant, evangelical Protes­tant, Jewish, and so on. The next step is to assess an individual’s commitment to that tradition through measures of their beliefs and practices, for instance, their rate of church attendance. Finally, this information is used to document different types of political variation.

For the authors, this strategy is indefensible because it assumes that message content is constant across a religious tradition. But the reality is that one Catholic priest may talk about social justice in every homily, while another scrupulously avoids political commentary. Hence, religion and politics research, Djupe and Calfano argue, must be seriously concerned with how people are exposed to religion.

Therein lies the main contribution of the book. In a series of empirical chapters, the authors vary exposure to a religious message, seek

The Faiths of the Postwar Presidents: From Truman to Obama, David L. Holmes Reviewed by DAVID O'Connell