Law and the Gay Rights Story: The Long Search for Equal Justice in a Divided Democracy, Walter Frank 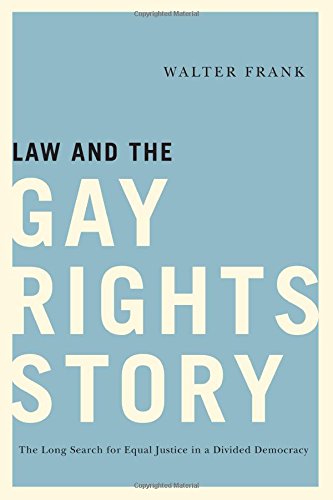 Walter Frank has written an engaging account of the evolution of the modern gay rights movement, with a particular focus on the broad scope of legal claims the movement has generated. The book’s signal achievement is its accessible and compelling prose. Frank translates legalese into English, and he tells vivid stories that drive home the human cost of antigay discrimination. Moreover, he packs a lot of law, history, and politics into a small package, making his book an excellent primer for undergraduates and laypeople interested in either the gay rights movement or the study of law and society.

The first third of the book lays out a chronology of the emergence and progress of an organized movement for gay rights in the years between 1945 and 1992. Up until the 1980s, Frank argues, the primary goal of lesbians and gay men was freedom: freedom from state harassment and arrest, freedom to express themselves, and freedom to gather with others. However, the over­whelming demands of the AIDS epidemic radically transformed the lives of lesbians and gay men, and by the 1992 elections, a new emphasis on equality and full integration into American society was beginning to coalesce.

It is this search for equality that most captures Frank’s interest. After two prefatory chapters, one discussing larger sociopolitical trends concerning gay rights