The Crusade for Equality in the Workplace: The Griggs v. Duke Power Story, Robert Belton 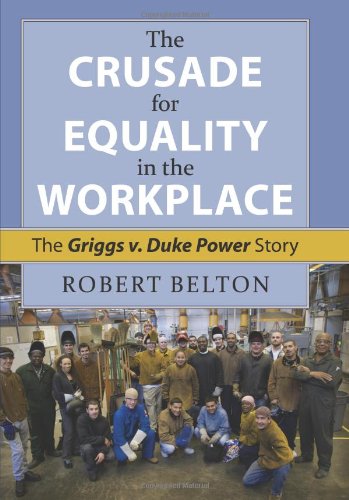 This book examines the long history of Griggs v. Duke Power Company, the 1971 U.S. Supreme Court decision that expanded minority rights at work by affirming the disparate impact theory of discrimination. Griggs remade es­sential knowledge about the nature of workplace discrimination and its rem­edies by subjecting to scrutiny the outcomes produced by even facially race-­neutral policies, thus displacing the previous sole focus on identifying bias in employers’ motives. Beginning in the years when Title VII of the Civil Rights Act “had more bones than flesh” (p. 45), Robert Belton analyzes the Griggs decision to provide a window into the campaigns and conflicts that cemented legal conceptions of equality and discrimination. A biography of the disparate impact theory, The Crusade for Equality in the Workplace traces the origins, establishment, and long-term prospects of an opinion that reset the course of the workplace rights revolution.

With care and precision, Belton unfolds the story of Griggs v. Duke Power Company: its origins, development, and legacy. Exhaustively researched, The Crusade for Equality in the Workplace captures the perspectives of the many actors who had a hand in the Griggs decision’s passage and interpretation: interest groups, attorne