A Sense of the Enemy: The High-Stakes History of Reading Your Rival’s Mind, Zachary Shore 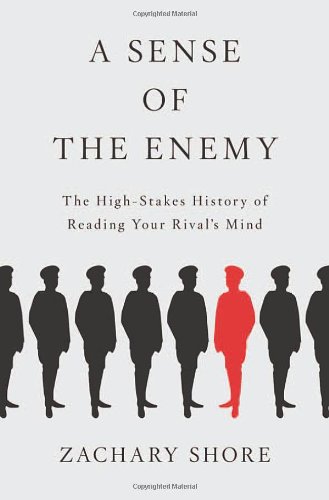 The principal goal of this study is to illuminate the task of predicting behavior in “matters of war and peace.” According to Zachary Shore, strategic empathy, or the ability to think like your opponent, is a critical skill for doing so successfully. This comes not from analyzing patterns of past behavior but from close attention to performance during pattern breaks, or departures from such regularity that expose an opponent’s underlying “drivers and constraints” (pp. 2–4, 6–8, 163).

From this description, A Sense of the Enemy appears to be one book. However, it reads more like two (strikingly different) books. Similar themes run through both, but the method of inquiry and theoretical coherence vary greatly.

The first explains how strategic empathy helped three leaders recognize the impact of pattern breaks on their opponents. These cases—Mahatma Gandhi’s response to the British massacre at Amritsar in April 1919, Gustav Stresemann’s attempt to restore Germany’s standing after World War I, and Le Duan’s evaluation of the United States during the Vietnam War—offer plausible expla­nations of these leaders’ growing understanding of their opponents’ motivation. Moreover, all are supported by historical research based on primary sources.

Reagan and the Gorbachev Revolution: Perceiving the End of Threat, Barbara Farnham