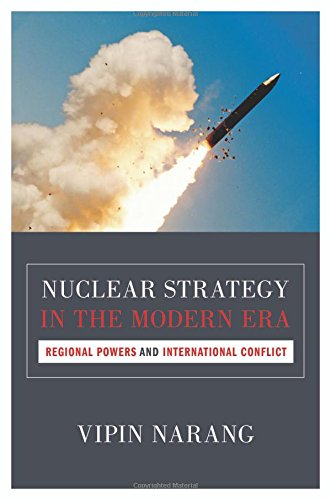 Predictions of rampant nuclear proliferation around the world have not come true, and the international security literature has discovered many reasons for the persistence of the global nonproliferation norm. Nevertheless, there are now eight or perhaps nine states that could commit another Hiroshima-scale massacre in the blink of an eye. In Nuclear Strategy in the Modern Era, Vipin Narang moves beyond proliferation to the causes and consequences of regional powers’ nuclear postures. This book fills a gaping hole in the existing literature.

Narang postulates three generic nuclear postures that a regional power may adopt. First, the “catalytic” posture stops just short of overt declaration of nuclear weapons acquisition, aiming instead to use that possibility as a diplo­matic card to force superpower intervention at a moment of supreme national emergency. Second, the “assured retaliation” posture develops a credible sec­ond-strike capability and an equally credible commitment not to launch a first strike. Third, the “asymmetric retaliation” posture develops a credible threat to use nuclear weapons first in order to nullify an opponent’s conventional military advantage.

To explain states’ choice of posture, Narang adopts a “neoclassical realist” approach that he dubs &ld