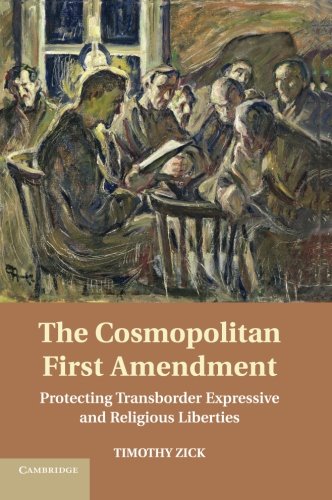 International freedom of expression scholars face a potentially intractable problem. Sovereignty defines jurisdiction; territorial borders thus set the bounds of the law’s reach. In The Cosmopolitan First Amendment, Timothy Zick, the legal academy’s foremost theorist of the relationship between speech and place, provides a path for reconciling a global orientation to protecting speech and religion with law’s geography-based limits.

The First Amendment has historically been conceived as operating from the United States’ borders inward, or, as Zick terms it, provincially. Law’s protections under the provincial approach cover only intraterritorial speakers and believers. At its most pernicious, the approach treats foreign speech as something to be feared—an eroding influence on our constitutionally protected liberties. The logical response has been to fortify the borders, at the expense of anything that might come in or out. But speaking, worshipping, and traveling across borders are integral parts of modern life and learning. Accordingly, a provincial approach to speech and religion problems devalues the domestic benefits of a global perspective. It is also incongruous, if not incompatible, with the inherent dynamism of Internet-enabled communication, in which citizens and governments commingle and exchange on a consta