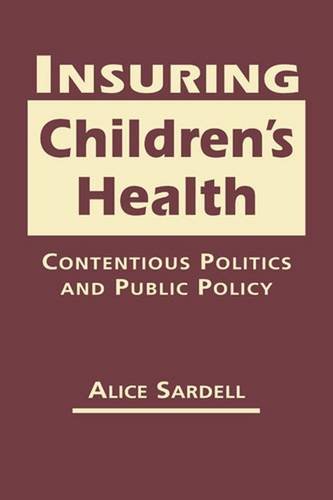 In this book, Alice Sardell provides insight into the policy process that is equally valuable to academics and to those seeking to understand or influence public process. Insuring Children’s Health focuses on the 1997 enactment and 2009 reauthorization of the State Children’s Health Insurance Program (CHIP). It makes a significant contribution to understanding the development and dynamism of policy communities, the study of issue framing, and the influence of past policy on contemporary possibilities.

These types of case studies are essential to understanding how and why a policy came about during a dynamic political and economic landscape. Sardell uses John Kingdon’s policy streams model, the issue-framing literature, and the policy legacy theory effectively. Theories are used to organize data collection and analysis. The result is insight into the role of history, policy actors, interest groups, and political parties in the enacted CHIP and its controversial reauthorization. Institutional analysis is also included on the roles of federalism and the legislative and executive branches.

The author provides keen insight into the development of policy communities and how they grow and change over time, reorganizing themselves as the policy environment shifts. Sardell details the organizational coalitions and how they came together with certain goals and strategies for CHIP passage and how organization roles and strategies evolved in the battle over reauthorization. Her analysis of groups includes the child advocacy community, the health care industry, pediatricians, scholars, foundations, research organizations, and think tanks. She includes fascinating subgroup analysis. One example is the collaboration between the pharmaceutical industry and Families USA to coordinate the reauthorization media campaign.

The juxtaposition of the passage of CHIP and the vetoed efforts to reauthorize it under President George W. Bush highlights the increasing partisanship divide between the parties. In the wake of the failed Bill Clinton plan, a bipartisan agreement and political center formed around covering children, a “deserving” group and the future American workforce. Arguments on the right were made about the slippery slope to socialized medicine, while the left viewed CHIP as a step toward universal health care coverage. A reconfigured bipartisan coalition of supporters successfully moved reauthorization through Congress. In fact, there were no organized interest groups in opposition to reauthorization. Instead ideological concerns by the president with support from conservatives in Congress and think tanks led to the veto and aggressive executive orders and administrative action. These actions foreshadowed the partisan bifurcation experienced by the Affordable Care Act.

The conclusions delve beyond the implications for expansion of the Affordable Care Act and touch on persistent racial and ethnic diversity in coverage and health outcomes and how the United States does not measure up to Organisation for Economic Co-operation and Development countries in these areas. While the discussion here is accurate and important, the overall impact of CHIP on child health in the United States may require its own analysis. The real contribution is what the book adds to our understanding of the political process and the interaction of interest groups, political actors, and institutions of government. Overall, this is an important work that is valuable to scholars of health policy and political science as well as to practitioners.