Reviewed by Alexander B. Downes 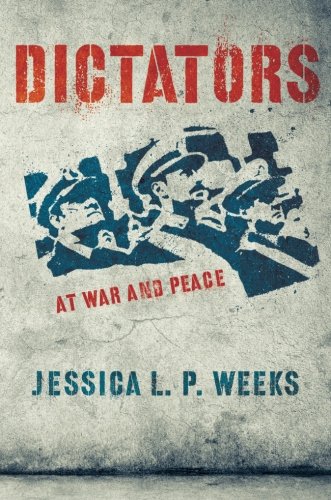 International relations scholars have traditionally characterized regime type as dichotomous: democracy versus nondemocracy. Nondemocracies are a diverse bunch, however, and recent research has begun to unpack this category and find some interesting and consequential variation. Jessica L.P. Weeks is at the forefront of this wave of scholarship.

In Dictators at War and Peace, Weeks categorizes authoritarian regimes based on whether leaders face domestic audiences that can hold them accountable for foreign policy failures—as in democracies—and whether leaders and audiences consist of civilian elites or military officers. Regimes in which leaders are vulnerable to removal fall into two types depending on whether both actors are civilians (machines) or military officers (juntas). Regimes in which leaders are immune from removal differ only in whether the leader has a civilian (boss) or military (strongman) background. Compared to machines and juntas, bosses and strongmen are more likely to go to war, more likely to lose those wars, but more likely to remain in power after defeat. Within the constrained and unconstrained categories, juntas and strongmen are somewhat more bellicose than their civilian-led counterparts owing to military officers’ positive views on force.