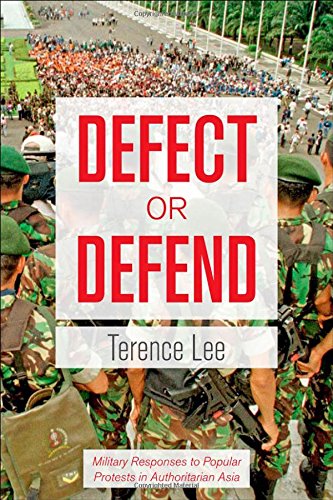 When authoritarian regimes collapse, the protestors who take to the streets, risking the government’s wrath, or liberalizing elites are generally lauded as the heroes of democratization. Yet militaries are often decisive actors in determining whether regimes endure or perish, choosing whether to protect the government, refuse repression, or even actively pursue the leader’s ouster. In this book, Terence Lee seeks to explain why militaries choose to either “defect or defend” when authoritarian governments face virulent political protests. To do so, he examines two cases of military defection and regime collapse, the Philippines and Indonesia, and two cases in which militaries repressed popular protests and successfully defended the regime, China and Burma (Myanmar). Lee provides impressive detail about the relevant events and decision making in these cases, utilizing revealing interview material to substantiate his arguments. This rich case material suggests that some of the concepts and theories could be further refined, potentially helping explain the outliers that the author refers to in the conclusion.

Crafting Civilian Control of the Military in Venezuela: A Comparative Perspective, Harold A. Trinkunas Reviewed by Deborah L. Norden

Taking on Goliath: The Emergence of a New Left Party and the Struggle for Democracy in Mexico, Kathleen Bruhn Reviewed by Deborah L. Norden

The Case against the General: Manuel Noriega and the Politics of American Justice, Steve Albert
Reviewed by Deborah L. Norden