Party in the Street: The Antiwar Movement and the Democratic Party after 9/11, Fabio Rojas and Michael T. Heaney 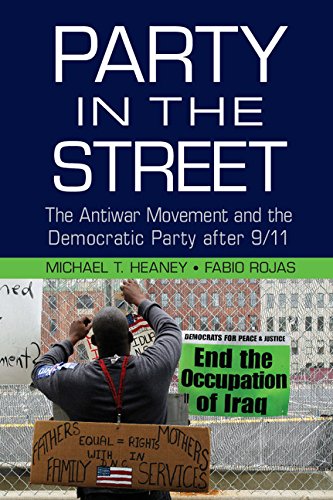 Social scientists have long grappled with the question of why social movements succeed or fail and what role, if any, aligning themselves with formal political entities plays in their success or demise. After more than 10 years of in-depth research, Michael T. Heaney and Fabio Rojas provide a theoretically and empirically sound and intriguing examination of the relationship between social movements and political parties by providing their conceptualization of a “party in the street,” which is a fresh way of understanding the intermingling between contentious and formal politics. This new theoretical framework stresses the multiple identities of individual actors in mediating the interaction between partisan and social movement identities.

The central focus of Heaney and Rojas’s study is the antiwar movement against the U.S. invasions of Iraq and Afghanistan following the 11 September 2001 terrorist attacks on the United States. The authors consider why the antiwar movement crumbled right after the Democratic midterm election victories in 2006 and before the election of President Barack Obama in 2008. Their use of both quantitative and qualitative methods is impressive, including survey data, interviews, content analysis, participant observation, ethnography, and regression analysis. Their utilization of this broad scope of methods provides a s