Women in Politics in the American City, Mirya R. Holman 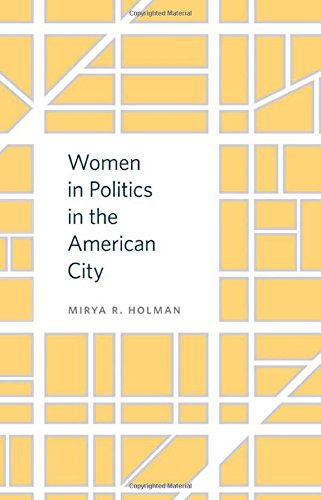 The underrepresentation of women in American politics at both the state and national levels has been addressed by many scholars. Through this research, we know that women govern differently and tend to have different policy priorities than their male counterparts. In this extraordinarily researched work, Women in Politics in the American City, Mirya R. Holman extends this line of inquiry to American city politics.

Holman employs rich survey, interview, and textual data to help us understand the ways in which female leaders at the local level make a difference in urban politics. She sets the stage for her analysis by describing the claims that are commonly made related to the limits of mayoral power. For example, local leaders must always keep in mind that citizens have the power to exit, taking their tax dollars with them. In addition, because urban governments lack money, they must often partner with the private sector to advance common goals. These partnerships, however, restrict the ability of local officials to pursue many other priorities of interest. Indeed, if an elected official tries to pursue policies that do not have broad and deep levels of support, he or she will likely fail, which will inhibit the mayor’s capacity to obtain other agenda items needed by the city. Finally, Holman notes that women, because they are residentially disper