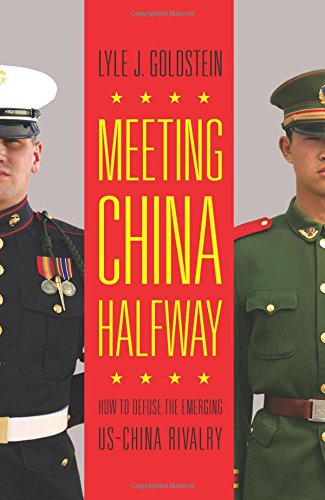 The rise of China has generated a debate in U.S. policy circles over how to respond to China’s new assertiveness. Those wishing to respond with toughness dominated during the 2015–2016 presidential primary season, vying over who would push back more strongly against Chinese trade infractions, cyberspying, human rights violations, and island building in the South China Sea. But other thinkers have more quietly advised the United States to seek a way out of what they see as a confrontational spiral by forging a compromise between core American and core Chinese interests in Asia.

For example, in his 2011 book On China, Henry Kissinger called for the creation of a Pacific Community “to which the United States, China, and other states all belong and in whose peaceful development all participate.” In 2012, the Australian strategic thinker Hugh White recommended in The China Choice: Why America Should Share Power that the United States share power on an equal basis with China as part of what he called a Concert of Asia. In 2014, former deputy secretary of state James Steinberg and Brookings Institution scholar Michael O’Hanlon wrote in Strategic Reassurance and Resolve: U.S.–China Relations in the Twenty-First Century that the United States should seek a “sustainable equilibrium” in Asia by taking reciprocal steps with Beijing to demonstrate that neither seeks to threaten the other’s core security interests. Other authors have advocated an end to the American security commitment to Taiwan, a reversal of the Barack Obama administration’s policy of “rebalancing” or “pivoting” toward Asia, and a reconsideration of the United States’ forward-deployed military posture in Asia.

Lyle J. Goldstein, a strategist at the U.S. Naval War College, spells out in more detail than anyone else has done so far a precise series of concessions that both sides could make on the issues that divide them in order to generate what he calls a “cooperation cycle.” He argues that each step would be reciprocated, so that neither side would have to make humiliating or irreversible concessions. By moving back from confrontation step by step in tandem, the two sides could build trust, with each step creating the basis for bolder steps that would lead eventually to a stable balance of power in Asia.

Goldstein focuses on 10 areas of friction between the two countries: Taiwan, trade, climate change, competition in Africa and Latin America, relations with Iran, policies toward North Korea, policies toward Japan, military and diplomatic posturing around the South China Sea, competition for influence in South Asia, and the military balance. His identification of these 10 issues and his analysis of what is at stake in each policy area are worth the price of the book, as they are exceptionally well informed and sophisticated.

The first sets of concessions that he recommends in many of the policy areas are plausible. For example, it makes sense for the United States to decrease barriers to the Chinese purchase of U.S. companies and to ease travel restrictions for Chinese seeking to visit the United States and for China, in turn, to encourage increased investment in the U.S. economy and tighten enforcement of intellectual property rights commitments that it has already made. Such steps are not only possible but likely, and it is true that they would increase trust. Even the higher-level steps in Goldstein’s hierarchy of trade-related concessions are perfectly plausible, such as the United States opening the doors of the Trans-Pacific Partnership trade agreement to potential Chinese membership and China allowing a free float for its currency, the renminbi. And when it comes to the problem area of the environment and climate change, the two countries have made such fast progress that they have come close to reaching the top level of Goldstein’s ladder of concessions already, with their strong commitments at the Paris Climate Conference to reduce emissions of climate warming gases.

On the other hand, in other policy areas, even Goldstein’s proposed first steps would be difficult to take. For example, to ease confrontation over the Taiwan issue, Goldstein recommends that the United States slightly reduce the number of forces forward deployed on Guam. But such a move would risk sparking a rapid deflation of U.S. credibility among ever-sensitive allies in the region. Likewise, Goldstein’s proposed first step for the People’s Republic of China (PRC) over the Taiwan issue, to initiate military confidence-building measures with Taiwan without insisting on a prior Taiwan acknowledge of the One China Principle, would likely be unacceptable to Beijing, as the One China Principle is the bedrock of its Taiwan
policy.

The higher-level steps he proposes for the Taiwan issue face even more severe obstacles. For the United States to “halt arms sales of new-type weapons” to Taiwan would violate the Taiwan Relations Act, which requires arms sales to be determined based on Taiwan’s objective defense needs; to go a step further and halt all weapons sales to Taiwan seems inconceivable, even if the PRC were to have taken the recommended prior steps on its side to reduce its military threat to Taiwan. And a PRC commitment to no use of force against Taiwan, which is the highest step on the Taiwan de-confrontation ladder, is a proposal that Beijing has consistently rejected since the 1950s because it views it as tantamount to a concession on the principle of sovereignty.

All this may be testimony to the special intransigence of the Taiwan issue, but some of the steps that Goldstein proposes on other issues seem equally real-world incompatible, even if they are desirable on their merits. It seems unlikely that the United States would close its Africa Command, reduce the size of the Fifth Fleet in the Middle East, or pressure Israel to give up nuclear weapons for the sake of reassuring China, even in response to compensating policy changes on the Chinese side, because each of these policies has strategic purposes that outweigh their use as bargaining chips in the China relationship. Likewise, it is unlikely China will (or even can) force North Korean nuclear disarmament or constrain its South China Sea claims within the limits of the United Nations Convention on the Law of the Sea, even in response to conciliatory U.S. moves.

The vision of a more peaceful world is attractive. Each of Goldstein’s proposals is based on detailed knowledge of the policy issues involved and carefully reasoned. However, as he acknowledges, as one moves up the ladder from easier mutual concessions to those that depart further and further from current policy on each side, the steps get harder to take. They culminate in major shifts of a kind that mainstream strategists in both countries would view, as he acknowledges, as appeasement. It is hard to imagine how such strategies could be sustained over several administrations in either country or obtain the support of either country’s allies. And Goldstein’s discussion barely touches on human rights issues, which seem to be non-negotiable for both sides.

Engaging China: The Management of an Emerging Power, A. I. Johnston and R. S. Ross
Reviewed by ANDREW J. NATHAN