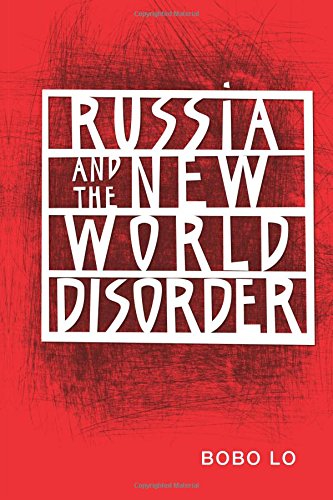 Bobo Lo’s new book provides both a fine-grained analysis of the Russian approach to foreign policy under Vladimir Putin and an incisive critique of it. Lo describes in detail Putin’s dual image of America and the West as being expansionist and a threat to Russia on the one hand and as being in decline, in need of cooperation from Russia, and containable as a result of Putin’s ability to act more quickly and effectively than them.

One of the most important defects in Putin’s foreign policy approach, the author points out, is to assume that America’s declining ability to manage world affairs somehow results in increased Russian (as well as Chinese and other non-Western) ability to do so. But, as Lo observes, “the days of major powers running global affairs are gone. The real lesson from the fiascos in Iraq, Afghanistan, and Syria is not the decline of U.S. power, but the inability of any power (or powers) to direct positive change beyond its borders” (p. 98).

Another defect, Lo notes, is Putin’s obsessive focus on the United States. “Moscow asserts that the era of American dominance is over, but continues to take the United States as the prime reference point not just for Russian foreign policy, but for international politics more generally” (p. 98). What this has resulted in is that governments in other parts of the world, notably Asia, understand that Moscow is far less interested in cooperating with them than in recruiting them for Russia’s many anti-American schemes. While these countries may be interested in building cooperation with Russia, most are not willing to do so at the expense of harming their more considerable cooperation with the United States.

The book presents detailed accounts (as well as the author’s assessments) of Russian notions of global governance (especially Moscow’s vague notions about a multipolar world) and Russia’s relations with America, Asia, and Europe. My one criticism of the book is that it lacks a similarly detailed account of Moscow’s relations with the Middle East, although discussion of this subject does appear throughout. Especially interesting are the last sections of the book, in which Lo discusses what a successful Russian foreign policy would look like (as well as why it is not likely to be adopted) and offers predictions about Russia’s role in the world in 2030 under four different scenarios: “soft authoritarianism,” “hard authoritarianism,” “regime fracturing,” and “second-wave liberalism.”

Although Lo sees liberalism as offering the best opportunity for Russia to cooperate with other countries and play an important role in world affairs, he is relatively pessimistic about Russia’s international prospects under all these scenarios. He not only foresees “the specter of a long decline at home and gradual marginalization in international society” for Russia but also that “Russia is less equipped than leading Western nations to adjust to decline” (p. 242).