Election 2014: Why the Republicans Swept the Midterms, Ed Kilgore 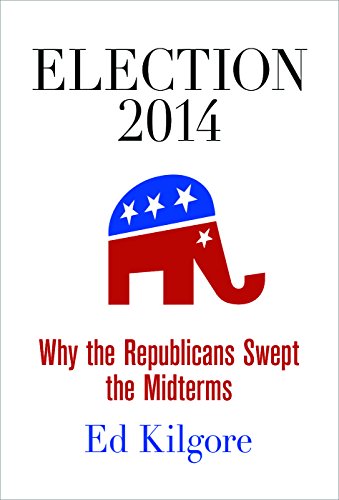 Campaign retrospectives are a now ubiquitous consequence of elections both momentous and unexciting, as Ed Kilgore notes in the preface to this concise volume. From Theodore H. White’s The Making of the President 1960 to Mark Halperin and John Heilemann’s Double Down: Game Change 2012, these books traditionally follow presidential elections and focus on the personalities and events that animated the campaign. Kilgore breaks that mold by writing a campaign retrospective of a midterm election, that of 2014. His aim is to provide “a clear understanding of the dynamics of the 2014 elections that transcends . . . the episodic reporting and analysis of political journalists” (p. x), ultimately explaining what happened and why. In five short chapters, Kilgore reviews the fundamentals that shaped the 2014 midterm elections, the primary contests, the general election campaign, the results, and the implications of the 2014 midterms for the future of American politics.

After a brief preface, Kilgore discusses the fundamentals and the narrative in which the 2014 midterm was fought. Although he does not cite scholarly work, Kilgore rightly reviews several fundamentals noted by political scientists to affect election outcomes, including differential turnout rates between presidential and midterm election years, the state of the econo