The Economics of Race in the United States, Brendan O’Flaherty 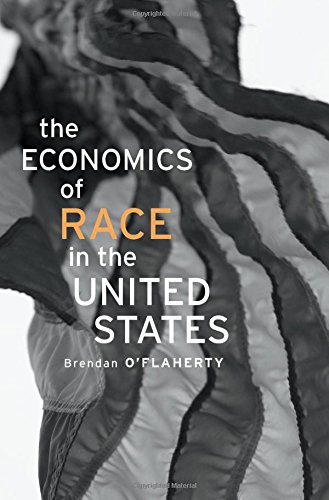 Race is a central organizing reality of the United States. Why exactly that is so remains controversial. Taking his cues from the classic texts written on race by Booker T. Washington, W.E.B. Du Bois, Gunnar Myrdal, Martin Luther King, Malcolm X, and the Kerner Commission’s Report of the National Advisory Commission on Civil Disorders (1968), O’Flaherty aims to answer key questions that emerge and to disentangle contradictory views of how race operates. For example, he asks, “Does race matter today or is it just a proxy for history?” (p. 21). Washington’s view, O’Flaherty argues, was the former—race is “a residuum of past events”—whereas Du Bois and the other texts would  stipulate that “the events unfolding today [are] amplifying those differences” (p. 21). Four other key questions arise relating to the separation or connection between the spheres of life and which sphere is most important for racial progress, the importance (or not) of interracial friendship and understanding, and the possibility/desirability of an interracial society with a history of racial exploitation. The classic texts differ on their positions with regard to these questions, but they lay a testable foundation for O’Flaherty to explore who got it right.

O’Flaherty poses the question, “What is r