Govern Like Us: U.S. Expectations of Poor Countries, M.A. Thomas 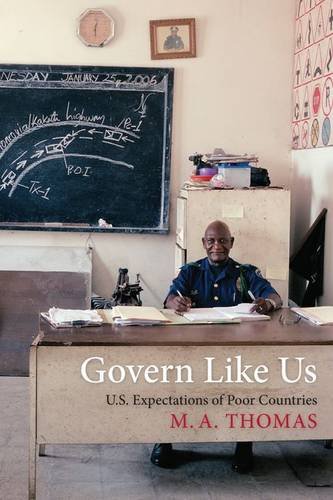 An array of strategies have been advocated to promote development around the world since World War II, with emphasis in recent decades on the importance of good governance. However, these strategies have clearly failed to lift significant portions of the global population out of poverty and insecurity and into stable, well-governed societies. Despite a handful of success stories, most developing states remain stuck in the “poverty trap” of weak governments that are too poor to produce the stability and rule of law needed for economic growth and unable to strengthen themselves without economic growth.

M.A. Thomas argues that “good governance” strategies fail because of a fundamental misunderstanding of the nature of the state in developing countries. Thomas argues that poor governments do not just govern less, they govern differently. Unable to afford the rule of law and social welfare provisions that legitimate the state in the wealthy West, poor states instead rely on older strategies of patronage, clientalism, and repression to stay in power, buying off individuals and groups or suppressing resistance. Development aid that expects poor countries to act like rich ones is doomed to failure, as aid is siphoned off in graft and redirected to preserve the position of weak elites. Good governance is therefore, per Thomas, a worthy goal but n