Beyond Civil Rights: The Moynihan Report and Its Legacy, Daniel Geary 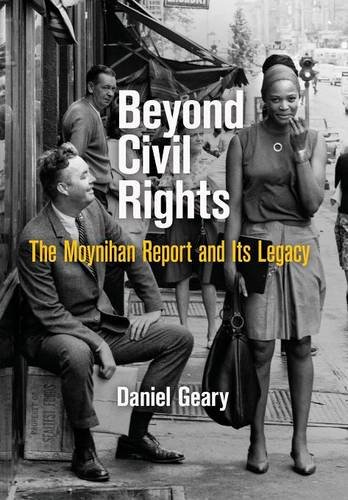 First published 50 years ago, the Moynihan Report has once again found itself the subject of national conversation. In October 2015, Atlantic writer Ta-Nehisi Coates penned a widely read (and commented on) tome on the state of the black family, drawing on the Moynihan Report and its subsequent (mis)interpretation. This caused many American readers to wonder about the Moynihan Report, a once-obscure government memo that surged powerfully into American consciousness and into the national debate. Who was Daniel Patrick Moynihan? Why did he write a report on the black family? What did it actually say? How was it read, and reread? And what effect has it had on American life?

Daniel Geary’s Beyond Civil Rights offers answers to these pressing questions, providing a concentrated history of the Moynihan Report and an analysis of its complex legacy. The Moynihan Report, drafted by Daniel Patrick Moynihan in 1965 as a government memo, addressed the pivotal issues of the day—race, crime, family, and inequality. Moynihan, a seasoned social scientist who had two years earlier published a now-classic work on immigration, Beyond the Melting Pot, relied heavily on statistics and the work of black scholars E. Franklin Frazier and Kenneth Clark in crafting his report. In the end, the 78-page The Negro Family read like a blend betwe