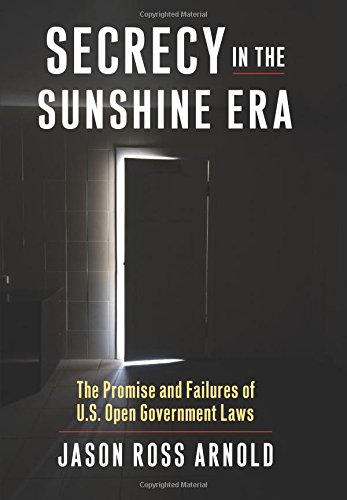 When President Lyndon B. Johnson signed the landmark Freedom of Information Act (FOIA) in 1966, he wrote of his “deep sense of pride that the United States is an open society in which the people’s right to know is cherished and guarded.” Behind the scenes, Johnson sang a different tune. According to Bill Moyers, who served as his press secretary, “LBJ had to be dragged kicking and screaming to the signing ceremony. He hated the very idea of the Freedom of Information Act” (Moyers, “In the Kingdom of the Half-Blind,” address for the 20th anniversary of the National Security Archive, Washington, DC, 9 December 2005).

And so began the first in a series of dysfunctional relationships between presidential administrations and modern open government laws. Those relationships are the subject of Jason Ross Arnold’s compelling new book, Secrecy in the Sunshine Era: The Promise and Failures of U.S. Open Government Laws. Arnold, an assistant professor of political science at Virginia Commonwealth University, describes “the post-1970s period” as “the sunshine era” (p. 3) in light of the host of federal “sunshine laws” that followed FOIA and passed “in quick succession in the 1970s” (p. 2). These laws held, and continue to hold, enormous promise for transparent and accoun