Rightlessness in an Age of Rights: Hannah Arendt and the Contemporary Struggles of Migrants, Ayten Gündoğdu 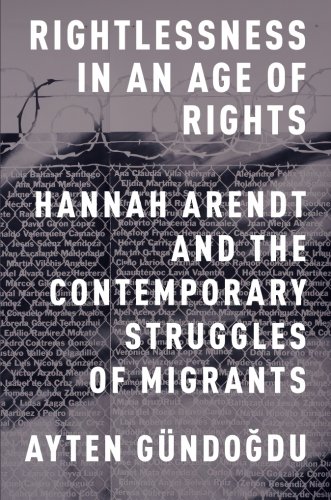 In 2015, media headlines on migration were as ubiquitous as they were troubling. An estimated 6,000 Rohingya Muslims and Bangladeshis stranded at sea were repeatedly denied refuge by multiple Southeast Asian nations. More than a million Syrians, Afghans, and Eritreans fled their war-torn countries, only to be met with interdiction, riot police, barbed wire, suspended rail lines, exceptional passport checks, holding facilities, and, eventually, closed borders. Across the Atlantic, tens of thousands of unaccompanied children and young families fled and continue to flee the violence and poverty of Central America to Mexico and the United States, only to be detained and expeditiously deported with equal disregard for international legal protections as for the fates awaiting them upon their return. Rather than recognize human rights and honor international refugee law, both the European Union and the United States have fallen into long-entrenched acrimonious debates, ultimately offering little relief to migrants and refugees on the move.

Rightlessness in an Age of Rights: Hannah Arendt and the Contemporary Struggles of Migrants by Ayten Gündogdu serves as an intervention into these contemporary, intractable crises through a careful examination of the debates and critiques surrounding political theorist Hannah Arendt’s call to rethink human r