If We Can Win Here: The New Front Lines of the Labor Movement, Fran Quigley


Reviewed by Taylor E. Dark I I I 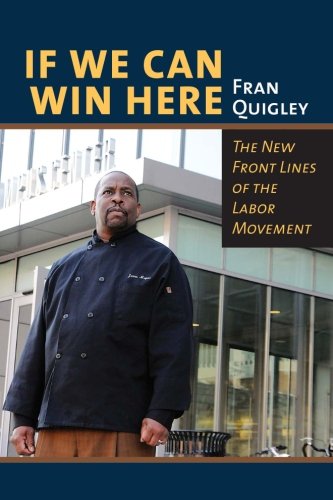 For many, it is a paradox of our times that while economic inequality and insecurity worsen, collective action by workers seems almost nonexistent. This contrast provides the background for Fran Quigley’s study of recent efforts to organize low-wage service sector workers in Indianapolis, Indiana. A law professor at Indiana University and an occasional participant in these struggles, Quigley provides detailed accounts of unionization campaigns among food service workers, hotel housekeepers, janitors, security guards, and home care employees. While his main focus is on attempts to secure union recognition and collective bargaining contracts, he also describes political mobilizations by workers to press for mandated wage increases and benefits and efforts by the city’s growing Latino population to push for immigration reform and economic equity.

Quigley is fascinated by the possibility that service workers can be mobilized into unions in much the same fashion that industrial workers were during the 1930s. The unions of that period, he argues, took manufacturing jobs that were “low-paying, dangerous, and provided little security or long-term benefits” (p. 17) and transformed them into the backbone of the middle class. Current service sector workers are likewise underpaid and ill treated but frequently employed by corporations generating mas