Reviewed by Scott A. Comparato 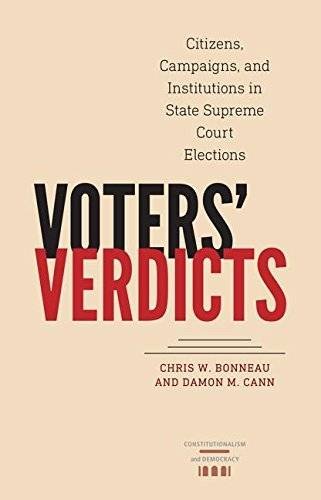 The last 20 years have seen tremendous changes in the importance of state supreme courts. These courts are increasingly at the forefront of legal and policy change, which has led to increased attention to the methods by which justices on these courts are chosen. Many policymakers and scholars have argued that the method by which state supreme court justices are elected has profound implications for the qualifications and judgment of the individuals on these courts and the decisions they hand down.

In Voters’ Verdicts: Citizens, Campaigns, and Institutions in State Supreme Court Elections, Chris W. Bonneau and Damon M. Cann explore the effects that cues related to judicial candidates have on voters in states with different judicial selection methods. The authors argue that in addition to differences in selection methods, recent decisions by the U.S. Supreme Court involving judicial campaign speech, judicial recusal, campaign finance, and public financing of elections have fundamentally altered the conditions in which state judicial elections are taking place, necessitating a closer look at these institutions. In addition to these changes, campaign spending in state supreme court elections has increased dramatically in the last 20 years. Bonneau and Cann explore the impact of these changes in the landscape of state supreme court elections using dat