A Class by Herself: Protective Laws for Women Workers, 1890s–1990s, Nancy Woloch


Reviewed by Vanessa May 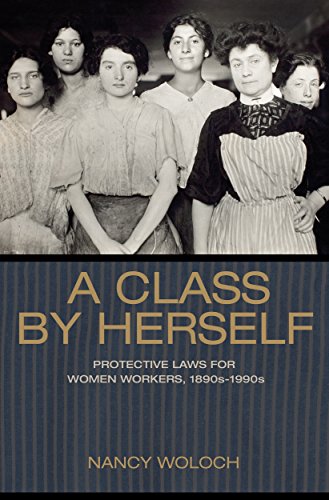 Nancy Woloch tells the story of protective labor legislation from the early twentieth century to the 1990s, recounting the activism of workers and social feminists who supported the laws and evaluating equal rights feminists’ and manufacturers’ critiques of protection. Woloch’s approach is largely narrative, but it reveals the impossible choice that feminists faced throughout this period: they could fight for a fictional equality that ignored the gender pay gap, bias in hiring, the bodily realities of childbirth, and women’s cultural responsibility for child care, or they could accept gender differences inscribed in law.

Woloch’s story begins in the early twentieth century, when Florence Kelley’s National Consumers League began to pursue maximum hours laws for women workers. From the beginning, Woloch argues, the court system fundamentally shaped the form and function of labor laws. The courts had proven hostile to labor legislation, invalidating laws protecting male workers, laws framed as public health measures, and laws that seemed to favor one “class” of citizens over another. The Consumers League tried to thread this legal needle by promoting women-only protective labor legislation. The league claimed that as “mothers of the race,” women needed state protection from the health effects of industrial labor (p. 43).

Kelley and the Consumers League hoped that women’s protective legislation would act as an “entering wedge” and that, one day, all workers would be protected from the demands of the capitalist labor system (p. 20). This entering wedge strategy proved successful when the 1938 Fair Labor Standards Act (FLSA) gave some male workers overtime pay and a minimum wage, thereby bringing a measure of equal labor protection to both male and female workers. The FLSA did not, however, produce wage or class justice. Minimum wages barely provided a subsistence living. While labor reformers hoped that overtime pay requirements would shorten men’s hours, business leaders saw wage premiums as an acceptable price to pay for more hours of work. Meanwhile, jobs requiring overtime remained out of reach for women, who were still bound by state maximum hours laws (p. 166).

Indeed, Woloch argues, legal equality often aligned with business interests. Equal rights feminists in the 1920s were largely professionals who chafed at the barriers protective legislation presented to women who wanted to compete with men. Even in the 1970s, feminist proponents of the Equal Rights Amendment (ERA), which would have wiped out gendered protective legislation, seemed “to accept the tenets of free-market individualism” in seeking equal competition with men (p. 229).

Although the ERA was never ratified, protection eventually died a slow death as feminist lawyers used Title VII of the 1964 Civil Rights Act to challenge protective laws in court. Equal rights, however, came with a cost, especially for working-class women, who could now be required to work overtime. Similarly, when the Pregnancy Discrimination Act undermined protective laws banning pregnant women from working in hazardous conditions, women won the freedom to risk their health and safety just as men did. As Woloch argues, “equality tends to favor those best equipped to claim it,” in this case  white-collar workers (p. 233). In all, Woloch presents a detailed and clear-eyed history of protective labor legislation. In a post–civil rights world, where equality is often understood to be a positive goal, Woloch’s history of protective labor legislation reveals that equal rights sometimes bring paradox and compromise.