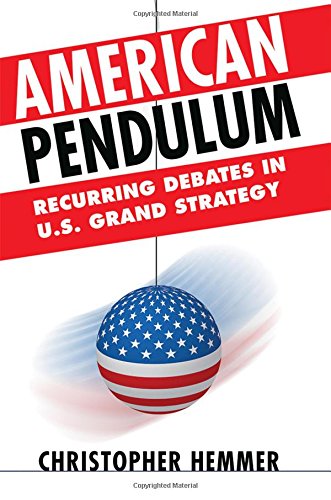 It is impossible to understand contemporary or future international politics without a firm comprehension of U.S. foreign policy. Even in a supposed era of relative decline, the United States remains the wealthiest, most militarily powerful, and most influential country in the world. Simply put, how the United States chooses to discharge itself is of enduring relevance for all inhabitants of planet Earth.

In American Pendulum: Recurring Debates in U.S. Grand Strategy, Christopher Hemmer offers a schema of U.S. foreign policy intended to delineate the realm of the possible when it comes to America’s actions on the world stage. Hemmer’s approach is to catalog and scrutinize some critical dimensions along which U.S. grand strategy has varied in the past and over which national leaders have clashed. He points to four areas of disagreement in particular: the divide between unilateralists and multilateralists, the debate over how best to spread U.S. values, disagreements over the proper extent of U.S. interests, and the question of whether time is “on the side” of the United States or its adversaries. To grasp the contours of these four debates, Hemmer submits, is to know how U.S. leaders think and, by extension, to apprehend the broad range of options that exist for America as a global power—now and in the future.

In large part, then, American Pendulum is a work of descriptive inference— an effort to show that debates along these four dimensions have, in fact, taken place and that they have been decisive in shaping foreign policy. To make his case, Hemmer turns to the historical record, running the gamut of twentieth- and twenty-first-century U.S. history—from Theodore Roosevelt to Barack Obama—and surveying an impressive amount of secondary historical literature as well as primary documents. The result is a convincing demonstration that debates over U.S. grand strategy have been recurrent and even fairly predictable—despite the enormous changes that have taken place in U.S. domestic politics and the international environment over the past century.

American Pendulum is not just an expository effort, however; Hemmer’s normative argument is that dissent over U.S. grand strategy is a good and desirable thing (p. 173). “When properly used,” Hemmer writes, “grand strategy informs foreign policy decisions; it does not determine them” (p. 185; emphasis added). Yet without vigorous domestic contestation, a nation’s grand strategy is at risk of becoming ossified and oppressive, locking a blinkered cadre of elites into pursuing suboptimal foreign policies out of sheer dogma. Democracy, debate, dissension—these are essential safeguards of a solvent grand strategy.

Only two potential limitations are worth mentioning. First, American Pendulum mostly deals with security policy, and so students of foreign economic policy and other topics may find comparatively little of direct usefulness in these pages. Second, the book neglects to provide an explicit theory of who makes foreign policy, how, and why. This is an important limitation because if debate over foreign policy is so important for the health and vitality of U.S. grand strategy, it is surely necessary to outline exactly who should be having these debates and how productive debates can be encouraged. What are the respective roles of elites, institutions, and democratic publics, for example? It is simply hard to know how a healthy amount of democratic dissension can be maintained without a theory of the policymaking process.

Overall, though, American Pendulum is to be recommended for proposing a novel schema of U.S. grand strategy and for making a forceful—and timely— case for domestic debate over the application of U.S. power abroad. It would certainly be at home on a graduate syllabus, although advanced undergraduates will have no difficulty appreciating its core arguments and contributions.