The Workfare State: Public Assistance Politics from the New Deal to the New Democrats, Eva Bertram 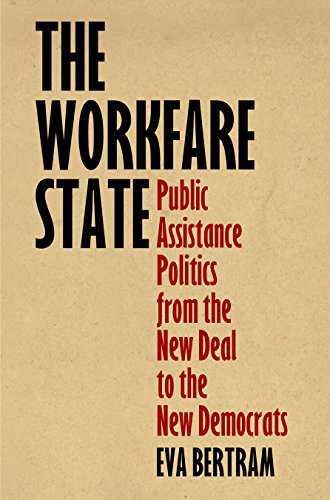 The American social safety net is dominated by a logic of workfare. Programs revolve around moving the needy into jobs as quickly as possible, and since the 1990s, public assistance for all but a small number of groups has been progressively conditioned on employment.

Eva Bertram argues that these arrangements magnify rather than mitigate
the consequences of an increasingly polarized, volatile labor market, offering only limited relief to the most vulnerable during times of severe economic collapse. How and why the United States abandoned its need-based entitlement programs in favor of these delimited workfare supports is the central question that animates Bertram’s compelling study.

The orthodox answer would point first to the Democratic-sponsored expansion of welfare state programs during the 1960s and 1970s and second to a Republican-led retrenchment during the 1980s, provoked by that earlier expansion. Bertram’s answer challenges this conventional account.

Instead, she suggests that the first crucial time for building workfare was in fact the expansionist period of the 1960s and 1970s. Public assistance grew, but the increase in expenditures and enrollments masked the shape of this growth. Amendments to the Social Security Act in 1962 quietly introduced optional work incentive programs for welfare recipients, which Congress later built on in 1964, 1967, and 1971. Meanwhile, the creation of Supplemental Security Income in 1972 strengthened benefits for the “unemployable” elderly and disabled but separated assistance for those groups from aid to poor families, who were increasingly viewed as “able but unwilling to work” (p. 69). This rendered Aid to Families with Dependent Children politically vulnerable in the 1980s and 1990s. Workfare was thus launched and welfare weakened, even as public assistance expanded.

Bertram traces in meticulous detail the legislative battles that transformed welfare into workfare from the John F. Kennedy to the Bill Clinton administrations. Her carefully sequenced descriptions expose the long-standing presence of workfarism in federal antipoverty policy but also reveal that it was conservative southern Democrats who deliberately and persistently weakened traditional welfare programs, stymied liberal efforts to increase eligibility or benefits, and advanced the workfare agenda. Republicans may have furthered these aims in the 1980s, but Bertram makes a strong case that southern Democrats, old and eventually new, should be credited as the true architects of the current workfare regime. The most definitive expression of workfare, the Personal Responsibility and Work Opportunity Reconciliation Act of 1996, was negotiated and signed into law by Democratic president Bill Clinton.

The Workfare State does more, however, than add nuance to a story that has been oversimplified in frequent retellings. Bertram’s analyses draw attention to the troubling motivations of conservative southern Democrats. She demonstrates that when America’s safety net was fundamentally redesigned, the ideas guiding that transformation were generated by leaders who sought to preserve the stratified political, racial, and economic status quo of the old South. These policy innovations have since been widely accepted and codified, cloaked in race-neutral language that obscures their original intent.

Congressional leaders and business owners, for example, worked to defeat President Richard Nixon’s Family Assistance Plan because they feared that extending cash assistance to the millions of poor whites and blacks in the South might disrupt local low-wage labor markets, upsetting the political order by providing blacks with “a new base of economic security,” decreasing “the effectiveness of economic reprisals—such as reductions in pay or loss of employment—that many employers used to intimidate blacks from voting” (p. 72).

At times, the book’s thorough efforts to trace each step of workfare’s development can make its victory over welfare seem all but inevitable. However, this small note should be understood as the most minor of critiques. Bertram’s study offers a vital corrective to our understanding of welfare reform and public assistance in the United States.