The Rise of the Right to Know: Politics and the Culture of Transparency, Michael Schudson 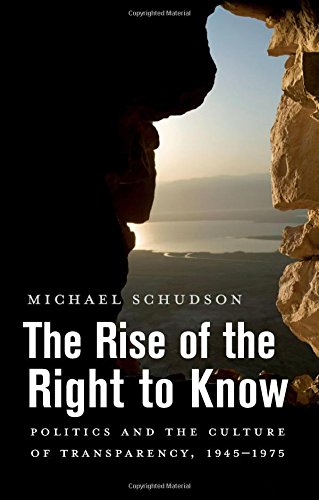 Michael Schudson went looking in the 1960s for the origin of an unheralded sociocultural change favoring openness and the “right to know” and came up short. He also did not find much evidence of full transparency as a fundamental democratic virtue lurking in the Founding Fathers’ rhetoric—a good second guess. Instead, Schudson discovered, against his sociological training, which favored structure over agency, a disparate group of individuals who brought Americans a broad array of political, economic, and cultural changes, including the Freedom of Information Act (FOIA); a more adversarial, analytical press; environmental impact statements (EIS); consumer-informing disclosures, such as unit pricing in supermarkets; “informed consent” research procedures; and open discussion about formerly private matters, such as women’s health and sexuality from Our Bodies, Ourselves to Betty Ford’s radical mastectomy. The book’s main argument is that these changes together ushered in a “society of self-disclosure” (British sociologist John Thompson) in which openness and transparency became “a practice and . . . a value” (Schudson).