London Is the Place for Me: Black Britons, Citizenship and the Politics of Race, Kennetta Hammond Perry 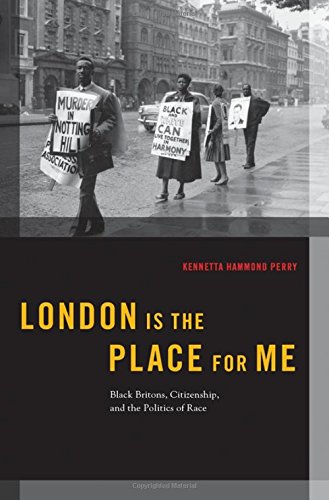 In 1948, the Empire Windrush docked in London with over 500 West Indian passengers—the first postwar wave of Commonwealth migrants seeking better economic opportunities in the metropole. Their arrival sparked a fierce public debate about race, immigration, and citizenship that reached its crescendo in the 1960s. Kennetta Hammond Perry’s excellent new study explores how these black Britons shaped the civil rights movement in Britain. Perry argues that black migrants made claims about citizenship and cultural inclusion that successfully challenged racial discrimination. “In doing so,” she contends, “they subsequently remapped the very boundaries of what it meant to be both Black and British in a critical juncture in the history of empire and transnational race politics in the twentieth century” (p. 6).

Perry begins by addressing how West Indian migrants battled institutional and cultural racism with an appeal to a shared sense of Britishness. Under the provisions of the 1948 British Nationality Act, all Commonwealth subjects technically enjoyed the same legal status. In reality, nonwhites faced discriminatory practices in housing and employment, as well as relegation to the cultural margins of society. Black Britons fought back by embracing a malleable identity that was, at least in part, “British.” In one