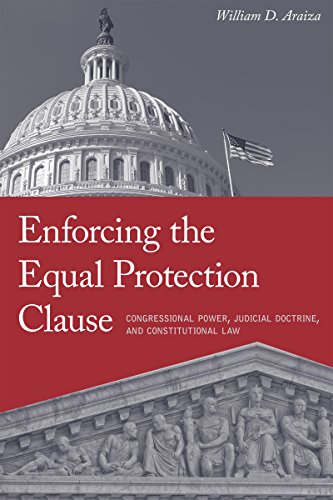 
William D. Araiza offers a timely doctrinal analysis of the Fourteenth Amendment’s enforcement clause. He opens the analysis with a convincing argument about why this clause deserves a closer look. As he notes, this provision presents something of a puzzle, a grant of legislative authority among rights that generally empower courts. Moreover, understanding this power is particularly urgent given narrow judicial interpretations of the commerce clause and federalism that limit congressional authority—limits that are likely to be maintained and perhaps extended now that President Donald Trump has appointed Justice Antonin Scalia’s successor.

In addressing this puzzle, Araiza does not call for wholesale changes to Fourteenth Amendment jurisprudence but rather shifts in its application to make it more coherent, predictable, and legitimate. While no brief review can do justice to an argument that is developed over 10 chapters, the gist is relatively straightforward. Araiza argues that the core of the Fourteenth Amendment requires laws to be rational and not motivated by animus toward particular groups. Over time, it has also placed sharp limits on racial classifications and laws that impinge on fundamental rights. Araiza contends that Congress is typically better suited to enforce these principles than courts because of its “comparati