The Paradox of Traditional Chiefs in Democratic Africa, Kate Baldwin 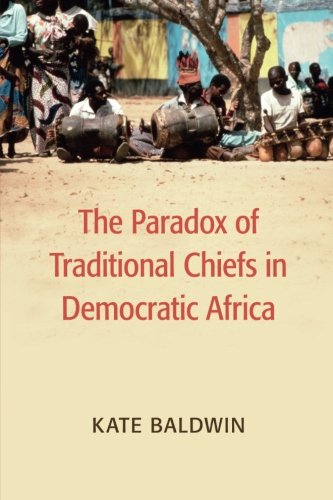 This is a book worth reading because it deviates from received wisdom in an intelligent and engaging way. In doing so, Kate Baldwin explores a fascinating paradox, namely, that “the empowerment of unelected traditional leaders often improves the responsiveness of democratic governments” (p. 5). The particular democratic government in question is Zambia, but the author makes a credible argument that her findings can be generalized to other democracies on the continent.

The problem of chiefs ultimately stems from the fact that all colonial powers in Africa were confronted with a similar dilemma. They wished to control vast stretches of territory but had to do so with few resources and little manpower. The “solution” to the dilemma of implementing colonialism on the cheap was to rule through the traditional leaders they found already on the ground or, in some locales, to create them where they did not exist. To be sure, the colonial powers all had different ideological and theoretical justifications for how they handled the customary authorities they found in place, but at the end of the day, the solutions usually resembled something akin to the British variant known as “indirect rule.” This meant that the alien power would rule through the already existing structures of governance. The primary responsibility of the chiefs, from