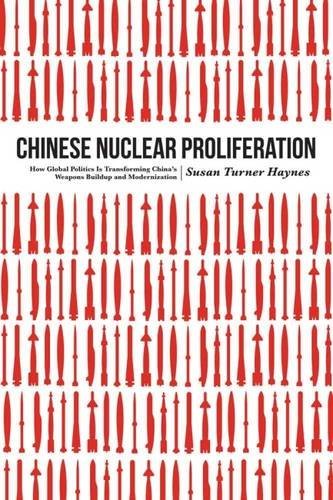 Susan Turner Haynes’s book starts with a puzzle: why is China the only recognized nuclear power among the signatories to the Non-Proliferation Treaty that is expanding its arsenal and the means of its delivery since the end of the Cold War? To address this puzzle, she presents a typology and analysis of five nuclear deterrence strategies: existential, minimum, limited, extensive, and maximum. Each strategy is distinguished by its aims, professed use of nuclear weapons, targets, force requirements, force size, and beliefs underlying it. The answer to her puzzle is that given changes in the international system, particularly what appear to be changes in U.S. nuclear strategy (from extensive to maximum), China is moving from minimum deterrence to limited deterrence. Thus, her initial puzzle may not be all that much of a puzzle. She compares China’s force structures with those of the other major nuclear powers and examines China’s nuclear strategy in more detail using the works of Chinese party and government officials, academics, and military writers to elucidate various threads in Chinese discussions of nuclear warfare strategy. She then considers the influence that the United States has on China’s thinking about nuclear war, the influence of regional powers on China’s nuclear strategy, and how prestige concerns affect China’s strategy. Finally, she concludes with suggestions about how to promote China’s participation in future nuclear disarmament conversations.

The book is well done, and the typology of nuclear deterrence strategies and comparative discussions of China’s actions compared with the other major nuclear powers are particularly useful. At the same time, based on limited materials, the book is a little thin (both in length and in available source materials with which it has to work).

Haynes correctly notes that nuclear proliferation has two dimensions, horizontal—the sharing of nuclear weapons technology, knowledge, and perhaps weapons with others—and vertical—the increasing of one’s own nuclear arsenal and the increasing sophistication of its delivery mechanisms. For most people, however, proliferation is usually associated only with horizontal proliferation. For those looking for a discussion of China’s role in the Pakistan, North Korean, Libyan, and other nuclear programs, this book will be a disappointment because the book is only about vertical proliferation—China’s growing capabilities.

One can also raise questions about the connection between discursive deterrence strategy and what was really going on. For example, Haynes argues that the Soviet Union was the only state that actively pursued a maximum strategy of nuclear deterrence (fighting and winning a nuclear war) from 1955 to the late 1960s. Yet for much of this time, Nikita Khrushchev was calling for peaceful coexistence because he feared nuclear conflict meant the end of humanity (contributing to the Sino-Soviet split). We also know from materials available after the fall of the Soviet Union that while Soviet military officials may have talked about a maximum strategy, Soviet capabilities were extremely limited until the early 1960s, and rough parity with the United States was only achieved by the late 1960s, at which point the Soviets adopted an extensive deterrence strategy.

This case is important because it raises the issue of how we should evaluate similar kinds of doctrinal writings on the Chinese side, which Haynes uses to support her argument that China is shifting its strategy from minimum to limited deterrence. A significant number of these writings appeared well before the modernization of China’s nuclear capabilities was obvious. Were the writers well aware of these developments, or were they just writing to make a name for themselves? Certainly some of the things they said (about how nuclear war could actually be fought) suggest they do not have a good idea what they are actually talking about.

This is not to say that Haynes is wrong to cite them and use them to support
her argument. Rather, it is to suggest that these sources may not be the last word on Chinese nuclear strategy.