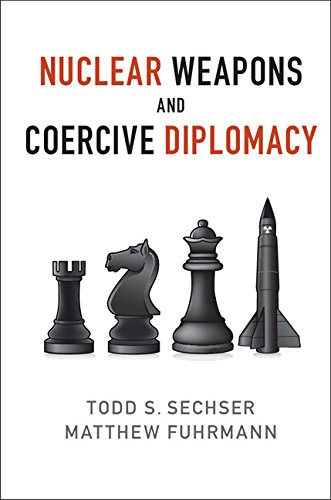 In a well-executed new book, Todd S. Sechser and Matthew Fuhrmann examine the benefits that nuclear weapons confer on the states that possess them. Specifically, they tackle the question of whether nuclear weapons allow states to coerce others. Their answer is clear: “nuclear weapons are useful in world politics for deterrence, but not coercion” (p. 59). Nuclear-armed states do not succeed in their coercive threats more often than non-nuclear states, and they do not generally do better in territorial disputes. And states that do seek to signal their coercive resolve with nuclear weapons often have their signals ignored or misunderstood.

Sechser and Fuhrmann's book is the most important work on nuclear coercion since Richard Betts's classic Nuclear Blackmail and Nuclear Balance, and it deserves a wide readership. Their book not only makes a theoretical contribution in laying out exactly why the nuclear holdup is rarely credible but also marshals an array of evidence in support of their argument that combines statistical analysis of compellent threats with historical evidence from cases of attempted nuclear coercion. For those in the academy and Washington, DC, who believe nuclear weapons grant states free rein in international politics, Sechser and Fuhrmann's book provides a valuable corrective.