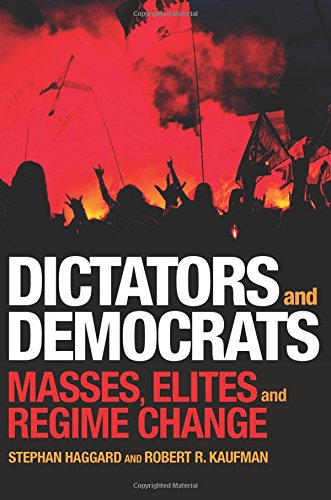 Stephan Haggard and Robert R. Kaufman probe the causes of the “third wave” of democratic transitions since 1980 and the reverse wave of transitions back to autocracy, which has been accelerating over the past decade. Their main target is the popular thesis that economic inequality hinders democratic transitions and that rising inequality may lie behind the trend toward reversions. Based on statistical analyses and probing case studies, they find, at best, episodic support for the inequality thesis: overall correlations are weak, and causal mechanisms frequently fail to match the logic of the theory. Haggard and Kaufman's own arguments, which highlight a “weak democracy syndrome,” emerge inductively from complicated patterns in their empirical findings. They provide grist for further theoretical work rather than a fully worked-out alternative.

Much prior scholarship on transitions and reversals makes claims about facilitating conditions such as fairly high per capita income, economic equality, a diversified economy not dominated by oil, a useable legacy of predemocratic political or administrative institutions, prior resolution of problems of national identity, an educated populace and organized civil society, and an international setting featuring democratic neighbors and great powers. Other scholarship describes transitional process

Eyewitness to a Genocide: The United Nations and Rwanda, Michael Barnett Reviewed by Jack Snyder

As Moscow Sees Us: American Politics and Society in the Soviet Mindset, Richard M. Mills Reviewed by Jack Snyder