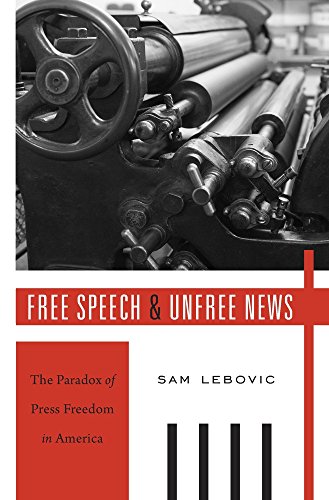 Sam Lebovic's book examines the hazy relationship between press freedoms and the actual execution of the press's democratic mission of providing accurate information so that individuals can be self-governing. The distance between a free press and an idealized responsible, public-serving press has persisted as a murky, difficult-to-navigate realm since the nation's founding. The problem has persisted because the potential components of a solution will not budge from their existing positions. The news media remain part of largely corporate, capitalistic endeavors—thus a conflict of interest between profit and public service remains a constant concern. This conflict is a crucial part of Lebovic's book.

Traditional interpretations of the First Amendment do not allow the government to regulate the press in a way that would compel publishers to be responsible to the people. Also, as Lebovic identifies, the government has its own conflicts of interest when it comes to ensuring that the press fulfills its responsibilities to the public. Governments have a propensity to control the flow of information by attempting to manipulate what journalists report, limit access to sources, and classify documents. How, under such circumstances, can the press be both free and responsible? As Lebovic rightly recognizes from the outset, “The idea of