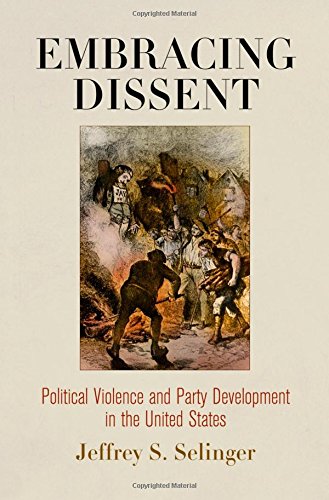 With today's acrid party polarization, even casual observers are aware that mundane government operations are becoming extraordinary. Symptoms include government shutdowns and the collapse of civility in public life. Yet compared with earlier periods in American party development, our current stakes are simply “not so great,” according to Jeffrey S. Selinger (p. 177). Polarization before the Civil War continuously posed a far greater threat of violent disunion.

Embracing Dissent challenges us to view democratization in the United States with fresh eyes. The reigning scholarly consensus holds that the unwelcome early rise of parties gave way to their practical uses and later celebration with the advent of mass politics in the 1830s. This narrative was established by Cold War historians such as Richard Hofstadter in The Idea of a Party System: The Rise of Legitimate Opposition in the United States, 1780–1840. By contrast, Selinger treats seriously the bleak assessment of parties by George Washington, James Madison, and later generations of party builders such as Martin Van Buren and Abraham Lincoln. In their own time, concerns arose from a clear-eyed appreciation for the structural fragility of the United States. Party systems that emerged were flexible enough to bend with various crises. But Selinger demonstrates that the risk was real that party polarization might simply break the republic.

The principal reason for danger was that the antebellum central state proved too weak to guarantee territorial integrity in the face of determined opposition. Deep partisan divides over issues that severely fractured the political landscape raised the specters of civil unrest, nullification, and, ultimately, secession. “‘Union’ is the talisman of the dominant party,” railed Timothy Pickering in response to the War of 1812 (p. 78). The arch-Federalist advocated secession by the New England states. Selinger artfully shows that Pickering's slogan could just have easily flowed from the mouths of impoverished yeomen in the 1780s, Jeffersonians during the Genêt Affair, and slaveholders across the second party system. Absent a credible federal monopoly on coercion, threats such as foreign wars heightened the danger that domestic partisan advantage would give way to fatal conspiracy. Previous scholars may have underappreciated how historical actors perceived party competition to be the vanguard of civil war, and justly so.

Leaders from Thomas Jefferson to Abraham Lincoln thus sought to make parties safe for democracy. Per Selinger, antebellum parties were not constructed on the “great principles” of the day (p. 14). Rather, parties were formed around the most pressing issues that could be politicized without risk of unleashing a cascade of political violence. Martin Van Buren and the Jacksonians brought party competition into the mainstream by taking the single most combustible issue—slavery—off the table. Even Lincoln initially followed a strategy of cross-sectional coalition building among slaveholding border states. The Emancipation Proclamation, however, was a revolutionary break with the long tradition of silencing antislavery voices in favor of national unity.

The central novelty of Embracing Dissent is to explain why opposition parties were only fully legitimized after the Civil War. With armed exit foreclosed as a viable pathway, turn-of-the-century political scientists could market parties as vehicles of orderly competition. Yet democratic stability was circumscribed. Populists and labor radicals were suppressed and, most comprehensively, black Americans in the South. Did party pluralism emerge consolidated, as Selinger maintains? (p. 165). That particular claim is debatable. One-party rule based on racial apartheid in the former Confederacy lasted a century. Nevertheless, this book is a welcome touchstone for students of American political development.