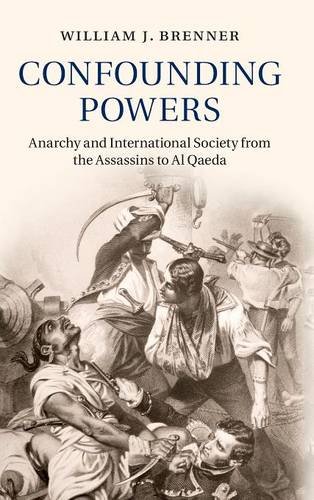 How do novel political actors emerge, and what accounts for their persistence? International society usually punishes those who refuse to play by its rules, but on occasion, certain forces emerge that not only thrive but alter those rules. The effects of such extrasystemic actors, those who refuse to conform to norms of international behavior, are the subject of William J. Brennan's Confounding Powers.

Brennan seeks to understand the impact and likely trajectory of al Qaeda by examining cases of previous experience with unconventional actors, specifically, the Nizari Ismailis, (commonly known as the Assassins), Mongols, and Barbary pirates. The book operates where two major schools of thought—neorealism and the English School—overlap, contributing to both systemic and societal conceptions of international politics. Brennan is hoping to contribute to an emerging tradition that he calls “analytic eclecticism” (pp. 8–9) by examining the importance of “dissimilar” actors to both the power structure of the international system and the normative structure of international society.

The Nizaris were a religious and nationalist offshoot of Shia Islam (a “heresy within a heresy,” according to Bernard Lewis [p. 70]) that emerged as its own polity in the late eleventh century and lasted until it was overrun by the Mongols about 170 years later. The Nizaris became famous for targeted killings of their enemies, which lent them a moral and historical significance out of proportion to their actual political importance. The same cannot be said for the Mongols, whose short-lived land empire was the largest in history. Their remarkable brutality, especially in the first decades of their conquests, convinces Brennan that they did not comport with the standing normative order of their time. Finally, Barbary piracy in the Mediterranean and eastern Atlantic persisted for centuries, despite desultory great-power efforts to extinguish it. They, too, did not follow the standard behavioral guidelines of their age.

One of Brennan's main conclusions is that structural conditions allowed these novel actors to rise. Each had the good fortune to emerge as a dominant power in the system that was declining: the Nizaris rose out of the ashes of the Fatimid Empire; the Mongols took advantage of the weak Jin Empire in China; Barbary pirates thrived because the Ottomans, who supported them at first, were weakening; and al Qaeda was inspired by the collapse of Soviet power. So while normative innovation may spur the rise of dissimilar actors, they will fail without structural opportunity. Brennan's is a story of opportunity and constraint, in other words, in both the system and the society of states.

One is left wondering why these cases in particular deserve further examination, since many such novel actors have emerged throughout history. Each is interesting and obviously relevant to his research questions, but it is not clear that they are the best to test his ideas. Brennan includes a section explaining the logic of his case selection, but he does not connect it to the four choices. They are better thought of as compelling examples of the logics under consideration rather than true tests of any particular notion.

Brennan devotes the last sections to an examination of the implications for the future of terrorism. “Will Al Qaeda fall apart like the Mongols,” he wonders, “or hunker down and eke out an existence like the Nizaris?” (p. 266). Although it is too early to tell for sure, one can be pretty confident in declaring that its trajectory will resemble neither. Once again, it is not entirely clear why these particular cases have much to teach those seeking to understand al Qaeda.

Still, the depth of knowledge and research about each case is impressive, and some of Brennan's conclusions seem sound and well defended. It is certainly a laudable goal to build bridges across theoretical chasms, and Confounding Powers does a good job of accomplishing that.

Credibility and the War on Terror, Christopher J. Fettweis