A Third Term for FDR: The Election of 1940, John W. Jeffries 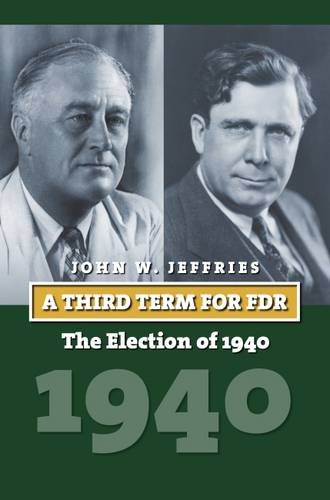 Arthur M. Schlesinger Jr. ends his Age of Roosevelt trilogy about the rise of the New Deal with the Democrats’ resounding victory in the 1936 elections. Schlesinger's choice reflects the scholarly consensus of his time, shared by historians of later generations, that the 1936 election cemented Franklin D. Roosevelt's domestic legacy. The 1940 election, according to this consensus, was focused on looming conflict with the Axis powers.

John W. Jeffries's A Third Term for FDR provides a provocative riposte to this conventional wisdom. Given Roosevelt's conflicting statements and propensity for subterfuge, the exact date and nature of the tipping point for his decision to seek a third term must remain opaque. But Jeffries amply documents Roosevelt's concern with the fragility of the New Deal in the wake of his failure to purge conservative Democrats in the 1938 congressional elections and as his two most likely successors, John Garner and James Farley, gravitated to the party's conservative wing. While Polish and Jewish voters anxious about events overseas may have sided in greater numbers with Roosevelt in 1940 than previously because of foreign policy concerns, the victories of Roosevelt and the Democrats in 1940 were driven by the same New Deal–friendly alliance of urban, working-class, and ethnic voters that