Everything Under the Heavens: How the Past Helps Shape China's Push for Global Power, Howard W. French 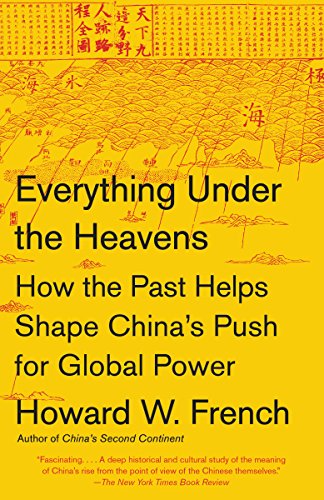 Abandoning a low-profile approach in international affairs, China has implemented a more assertive foreign policy during the era of Xi Jinping. Does Beijing have the intention and capabilities to rebuild a Sino-centered world order? Will China become a hegemonic power in Asia as well as in the world? How does the historical past shape China's foreign policy? Howard W. French, a journalism professor at Columbia University and a former New York Times journalist, provides a cultural and historical analysis of China.

The book focuses on the concept of tianxia, which can be translated as “everything under the heavens” (p. 4). It was a Sino-centered order in which China was the dominant power in ancient East Asia. French suggests that this historical legacy has shaped the Chinese worldview as well as its foreign policy. There has been a critical connect between domestic politics and international relations. From ancient Chinese emperors to contemporary Communist Party leaders, Chinese rulers constantly worry about “inside disorder and outside calamity” (nei-luan wai-huan) (p. 7). Chinese elites have tried to demonstrate China's power and prestig