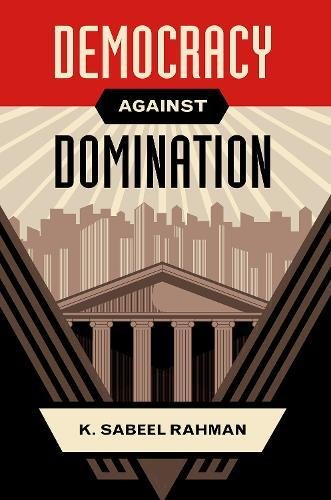 What does a good economy look like, and how do we get there? K. Sabeel Rahman asks these questions—one moral, the other pragmatic—and suggests that most contemporary political actors are looking in the wrong place for both answers. He characterizes the discourse as overly concerned with politically neutral metrics such as consumer welfare and growth, and he critiques policy debates as narrowly centered on the dosage of regulation: pitting more (and more sophisticated) technocratic management against a less regulated, freer market. Alternatively, Rahman reframes the problems with the modern American economy as problems of power relations, arguing that the good economy is one that prevents domination—the accumulation of arbitrary unchecked power over others—and that we can get there by making the regulatory state a site of robust democratic action.

Rahman's normative arguments are well constructed and will certainly find a supportive readership among progressives inclined to welcome the book's democratic recommendations and wariness of large corporations and technocrats. But Democracy Against Domination is more than a sermon the choir will love; it is a provocative reframing of today's dilemmas of economic justice, built on a synthesis of more than a century of regulatory law and political thought. In particul