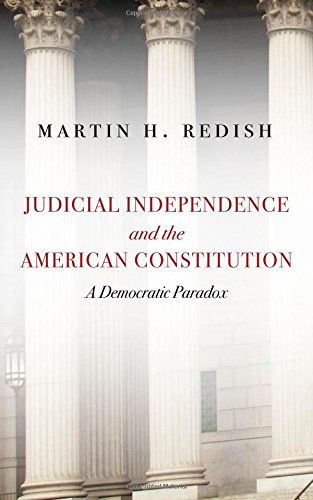 How can a society that espouses the virtue of democratic representation simultaneously empower an unelected judiciary to strike down acts of its elected legislature? In his new book, Martin H. Redish proposes that, far from weakening America's representative democracy, this supposed dilemma actually facilitates its long-term vitality.

The titular paradox posited by Redish is that in order for representative democracy under the U.S. Constitution to flourish, ultimate interpretative and enforcement power must be vested in a judiciary that is prophylactically insulated from popular pressure. He contends, conjuring Alexander Hamilton in Federalist, No. 78, that any meaningful restrictions on government power are effectively null if ruling majorities themselves pass judgment on the constitutionality of their actions.

Throughout, Redish's textualist arguments tend to proceed with an inevitable logical flow that would be at home in a high-quality legal brief or law school seminar. He makes perhaps the timeliest of these arguments late in the book. Chapter 6 contends that the suspension clause of Article I, Section 9 of the Constitution—that is, the government's power to suspend habeas corpus in times of rebellion or invasion—stands in conflict with the Fifth Amendment's due process guarantees. Partly because of the temporal order