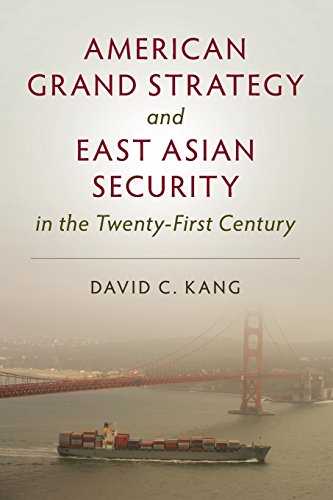 As China has risen economically and militarily, East Asia has become more peaceful, prosperous, and deeply interconnected. Why? This is the puzzle that David C. Kang introduces and grapples with in this timely and important new book. Kang explains these trends by pointing to the pursuit of “comprehensive security” among East Asian states. Rather than relying solely on military means, regional states are adopting “a wide range of diplomatic, institutional, and economic strategies . . . in their dealings with each other” (p. 4). Drawing on the crisis bargaining literature in international relations, and specifically on the distinction between “costly signals” and “cheap talk,” Kang argues that East Asian states are not building up militarily (or “signaling”) to counter China's rise simply because they do not see it as an existential threat, and therefore they lack the will (or “resolve”) to do so. These regional states do not have an interest in joining a U.S.-led counterbalancing coalition or in choosing sides in a potential U.S.-China conflict.

This book has many great strengths, three of which stand out. First, Kang boldly addresses what is arguably the most important question of modern international relations: what are the implications of China's economic and military rise in East Asia? Second, in addressing this question, Kang challenges what has become the conventional wisdom in many scholarly and policy circles: that China's rise threatens to trigger security dilemmas, balancing and bandwagoning dynamics, and regional hegemonic war. Instead, he argues, China's rise is a problem to be managed, even an opportunity to be embraced, not a dire threat to be defended against. Third, the book is an impressive empirical feat, including a regional comparison (Chapter 3), in-depth case studies (Chapters 4–7), “medium-n” comparisons (Chapter 8), and statistical analysis (pp. 55–59).

Despite the book's many strengths, however, there are aspects that are somewhat less convincing. For one, Kang considers two alternative explanations for East Asian states’ behavior: buck-passing and small state capitulation. Kang claims these arguments are “tautological,” “ad hoc,” and based on “backward induction” (p. 24). However, it is unclear why these arguments are any more tautological than Kang's appeal to a lack of resolve, and I would argue they are less so. Using behavioral outcomes to infer individual preferences—what economists call “revealed preferences”—which are then used to explain that behavior clearly risks tautology to a greater extent than these alternative explanations. And Kang's tests of the alternatives (Chapter 9) are interesting, even suggestive, but far from conclusive.

Second, Kang relies heavily on the “defense burden,” or defense expenditure as a percentage of gross domestic product, as a proxy for costly signaling. While there are clearly no perfect measures, this one may conceal as much as it reveals. For although defense burdens have declined among East Asian states since 1990, aggregate defense spending has increased in every regional state that Kang considers. And because some of these economies are so large (such as Japan, South Korea, Indonesia), even a small defense burden can amount to a considerable military expenditure. Finally, Kang's basic message is that the United States wants East Asian states to balance, but these states want to pursue their security comprehensively. However, the United States, too, is clearly pursuing its security comprehensively with respect to China. The U.S.-China trade and investment relationships are among the world's largest, the United States and China share deep diplomatic and political ties, and the United States’ defense burden and regional deployments have steadily declined since 1990. Thus, his findings ultimately may not be as counterintuitive as is claimed.

All these criticisms aside, this book should be considered required reading for anyone who is interested in East Asian international relations, the rise of China, and U.S foreign policy. It will undoubtedly be read, debated, and discussed for many years to come.

The Case of the Pivot to Asia: System Effects and the Origins of Strategy, NICHOLAS D. ANDERSON and Victor D. Cha