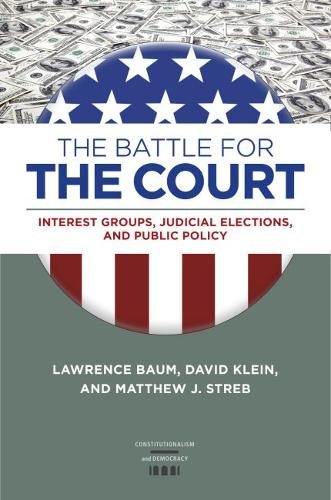 How do judicial elections affect judicial policymaking? The answer to this question has interested lawmakers, lawyers, and scholars for decades. The Battle for the Court tackles this question, drawing on data on Ohio Supreme Court elections over the past four decades to explain the role that Ohio's voters, judges, and interest groups have played in the development of tort law in that state. With a focus on tort law—a much-understudied topic in political science—and its nuanced take on interest group mobilization in judicial elections over time, this book has much to teach scholars of American politics generally, especially those who are interested in the tangled relationship between campaign finance and policymaking. This book should be required reading for those—inside and outside of the academy—interested in how elections shape policymaking in the states.

The book opens with an overview of tort policy in Ohio, examining how plaintiffs and defendants have varied over time in their success at Ohio's highest court. This changing playing field is essential, as it represents the baseline to which voters, candidates, and interest groups react as they plot their electoral strategies. The analysis reveals a surprising variability in tort decisions over time and demonstrates that justices had stable pro- or anti-plaintiff tendencies in their decision-making. Perhaps surprisingly, the authors demonstrate that these widespread shifts in Ohio tort policy are due to membership change rather than within-justice responsiveness to external pressures.

The book's third chapter shifts its vantage point to voters, drawing on an impressive amount of survey data to build a nuanced portrait of Ohio voters’ opinions and behavior in state supreme court elections. The authors convincingly show that the most important role of campaign spending is to increase candidate name recognition; while there is no strong relationship between spending and election outcomes in these Ohio judicial elections, the large amounts of spending by pro-defendant groups likely helped put their favored candidates on the bench.

Together, the book's varied perspectives—on policy, interest groups, and voters—represent a major advance in our understanding of the linkage between electoral campaigns and judicial policymaking in the U.S. states. The book's clearest limitation—a single-minded focus on Ohio—is also its greatest advantage. While the focus on a single state allows rich survey data and a nuanced treatment of state law, the single-state focus naturally raises concerns about generalizability, especially in a context in which electoral rules are unique (candidates run as members of political parties in the primary but not the general election) and campaigns are exceptionally expensive. Still, the authors take these concerns seriously, explaining why the results from Ohio should inform our general understanding of these campaigns. Scholars will undoubtedly take the hypotheses developed in this book to other states, examining how variation in ballot rules and the cost of waging competitive campaigns affect the behavior of interest groups, candidates, and voters.