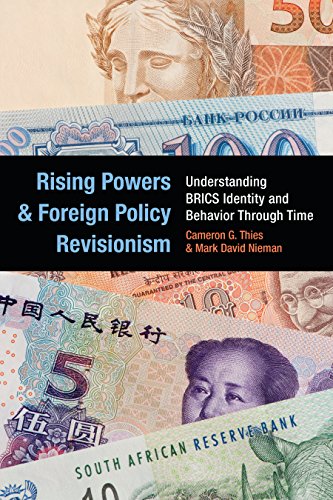 This project contributes to the extensive analysis regarding the consequences of emerging powers by focusing on the roles that Brazil, Russia, India, China, and South Africa (BRICS) play regionally and globally. The authors do so by comparing theoretical approaches and then conducting mixed-methods testing to examine whether the BRICS thus far have displayed conflictual behavior (military and economic). The book is rich in both theoretical development and empirical testing. Along with the results, it makes a valuable contribution to the literature.

As the international system evolves, international relations scholars continually ask themselves to explain whether emerging powers have the potential to increase the likelihood of major-power conflict. The authors first take into consideration the materialist hypothesis: as states’ relative powers increase, they become more conflictual. They then include another dimension, developed from role theory, regarding how the socialization of emerging powers into the group of great powers could dampen the likelihood of conflict. The new “foreign policy hypothesis” states that BRICS adapt their individual foreign policies through social pressure from great powers, thus reducing the likelihood of conflict.