Donald Trump and the Prospect for American Democracy: An Unprecedented President in an Age of Polarization, Arthur Paulson 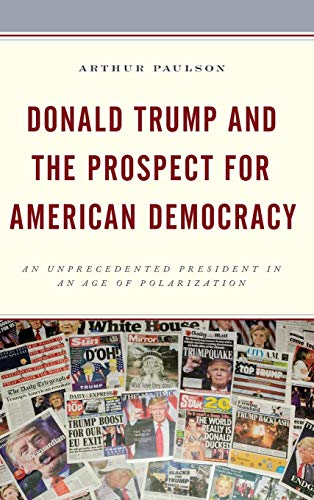 Despite its title, this book contains very little about Donald Trump. He is almost incidental to the narrative, which concerns the historical, institutional, and ideological context of the 2016 election. A reader may suspect that the book would have been called Hillary Clinton and . . . if a few states in the Electoral College had turned out differently. The discussion of Trump is largely confined to the beginning and end, and it is not particularly insightful.

No admirer of the current president—his behavior is called “tasteless, immature, and divisive,” and he is condemned for promoting ignorance, disunity, and great danger—Arthur Paulson has a habit of using the word certainly in a way that does not encourage dialogue with those who do not share his loathing (pp. 136, 150). Trump was “certainly the least experienced presidential candidate ever,” Trump “certainly aggravates” the threat to American democracy, and Trump “certainly” has done “visible harm to both freedom and democracy” (pp. 75, 145, 149).

Right or wrong, the 63 million Americans who voted for Trump in 2016, and the more than 40 percent of the citizenry who approve of his presidency, have a different perspective, and it should not be dismissed out of hand in a scholarly book. Paulson does concede