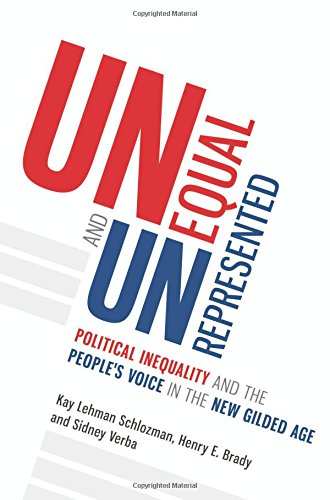 Who participates in American democracy? In particular, is it those with high levels of resources who most often vote, protest, contact elected officials, and discuss politics with friends? How unequal is political participation?

Political scientists Kay Lehman Schlozman, Henry E. Brady, and Sidney Verba have contributed important answers to these questions over the past few decades. In their first book, Voice and Equality (1995) these scholars traced associations between resource possession and political participation, finding extensive evidence of inequalities in political voice. In their second book, The Unheavenly Chorus (2012), the authors reiterated and updated the analyses of the first. The authors also extended Voice and Equality in a number of ways, primarily by examining organizational-level as well as individual-level participatory inequalities, and by assessing the likely efficacy of various reform strategies.

This third volume, Unequal and Unrepresented, “distill[s] two substantial books into a relatively short one…” (p. ix), repeating the core themes of the two earlier volumes. The presentation of the book is slightly different, foregrounding substance (even) more than before by relegating methodological details to footnotes. Thus, the book is perhaps best suited to an undergraduate audience.

Readers looking for new ideas will likely be disappointed, but readers looking for new data will not. The authors have updated their previous analyses to include data from years since their 2012 volume. Unequal and Unrepresented also claims to build on its predecessors by taking account of new political developments, such as Shelby v. Holder and the candidacies of Bernie Sanders and Donald Trump, but the book’s discussion of these recent events is thin. In any case, the upshot of these political scientists’ landmark contribution to our thinking about political participation is the same—as economic inequality continues to grow, participatory inequalities remain.